THESE two sides produced an epic Carlow Under 17 minor A final at Netwatch Cullen Park on Monday where it took extra-time to produce a winner.

Former Tipperary hurling great, Len Gaynor, was in the stand and he could not have but been impressed with what he witnessed. The game crackled from beginning to end. Some of the points scored by both sides, particularly in the first half, were nothing short of exceptional. 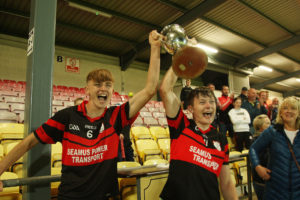 Muinebheag came into the game as underdogs. They shrugged off such suggestions from the start. A great point from James Farrell opened the scoring and acted as a note of defiance from the Bagenalstown Gaels. Their keeper, Stephen Lillis, also brought off a great save to deny Joe Dundon. While the net-minder may have let in half a dozen three-pointers he could do nothing about any of them. In fact he had an extraordinary game bringing off a string of saves and batted down several high balls in the direction of eager defenders who were only too happy to clear the danger.

Farrell and Aiden Dowling scored a goal each for Bagenalstown in the first quarter and when Oisin Dillon picked off another when under pressure Bagenalstown led 3-5 to 0-7 at the water break. Donagh Murphy was the Ranger’s dangerman firing over points from placed balls and play.

When Joe Dundon scored a Rangers goal they looked set to drive on for victory. Bagenalstown hit back with another goal. This time from Michael Mullins. Then disaster for them when Shane Cowman picked up a second yellow card. From the resultant free Donagh Murphy contrived to find the net. At half-time Bagenalstown led 4-7 to 2-10.

It was tight all through the second half. Jake Doyle’s 37th minute goal for Bagenalstown gave them breathing space but Rangers smelt a comeback. Even though Doyle landed points from play and frees the fourteen players couldn’t put distance between the sides.

Rangers also fell into their opponents trap by firing in aimless ball to a defence which had been bolstered by positioning corner forward, Billy Fitzpatrick as a sweeper.

Eventually the Rangers pressure told. They outscored Bagenalstown by 0-7 to 0-2 with Robert Stafford firing over the equaliser in injury time. That left the sides tied at 2-22 to 5-13. And so it was to extra-time.

In the first ten minutes of the extra-time Jamie Nolan scored a Rangers goal. Jake Doyle replied with a free but the Borris side smelled blood at this stage. Still at 3-23 to 5-16 after 70 minutes it was still there for either side.

Eventually Rangers made the breakthrough and in quick succession Jamie Nolan stole in for two goals to ensure victory for Rangers. It was sweet compensation for losing the football in such dramatic circumstances last week.

For Bagenalstown it was hard to take especially when they had come so near to upsetting the odds. Disappointment is definitely their overriding emotion now but they have to be proud of what they contributed to this amazing game. 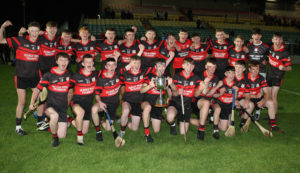