THE 2020/21 league campaign gets underway this weekend with great anticipation across the three mens divisions, the ladies league, and the youths. We welcome back Ardattin Athletic who have reformed and will start in Division 1 with a very experienced panel. We also welcome Freebooters ladies who join our ladies league for the first time and wish them every luck. As league secretary (Brian O’Reilly) I will go through the divisions based on my knowledge and for a bit of fun will try and predict a winner in each league and will ask Nationalist reporter Harry Shorthose for his opinions. We also decided to generate a bit of interest on social media and ran a twitter poll which got a great reaction with over 500 votes across the polls as the clubs supporters voted for the winner and relegation favourite in each division. The results of the polls are below. 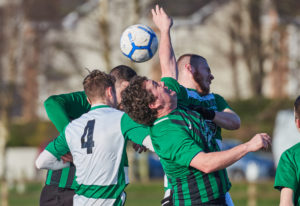 Hanover Harps and Killeshin will be competing in the The Nationalist Premier Division
Photo: michaelorourkephotography.ie

We welcome Kilree Celtic to the top division for the first time and hope they have a great season. They will need a quick start I reckon to make sure they do not end up in a relegation scrap. Scoring goals should not be a problem for them but coming up against tougher opposition every week might stretch their squad if they get some injuries or suspensions.

The battle at the top for me should be between New Oak, Crettyard, Hanover and Slaney with these four doing well last season it will be interesting to see how they far out with the games against each other been crucial. New Oak will want to win back to back titles while Crettyard want that crown back and with both sides having some new signings it could be a good battle. I fancy Crettyard to win it this year but reckon it will go to the last couple of games and the two games between the top two will be crucial. Slaney Rovers will be opening their new pitch and as teams found out last year they aren’t easy beat there, with both the top two failing to win. It will be tight for third with Hanover but I’m going for Slaney.

The battle for mid-table and relegation will be interesting with Dolmen and Parkville having new coaches they could be the surprise packages but I’m going for both to finish mid-table and avoid the drop comfortably. Killeshin have their stunning new facilities and will love playing on a great surface every week, they have entered three teams with one in all divisions and they will need a good start to stay out of a relegation dogfight. St Pats, Ballymurphy and Kilree will all need to win their home games to make sure they stay up and none of the big boys will want to travel to these teams for me their home games will decide the relegation race but I’m going for Ballymurphy or Kilree to finish at the bottom. 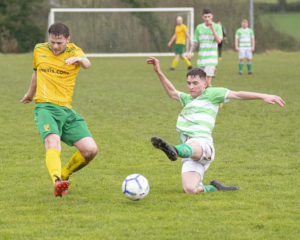 New Oak and Certtyard will be among the title challengers again this year
Photo: Thomas Nolan Photography

Harry Predicts: Champions – Crettyard/New Oak (I genuinely could not call this one due to it being so close the past couple of years, Crettyard have more strength in depth than New Oak might but if either side picks up three or four serious injuries, they are in trouble. It’ll be close between them again and I can’t see anyone else running them close)

Relegation- Ballymurphy (They have been bottom the past couple of seasons and it’s hard to see how their fortunes will change this season, they struggled badly the last couple of years and will likely struggle again this season but expect St. Pat’s to run them close.)

This division has increased from the six teams that finished last year to a very competitive league of ten teams. We welcome newly formed Ardattin to the division along with St Pats Boys B and Bagenalstown who were promoted after a very convincing season last year. We also welcome Killeshin B who had to come up after they entered a C team and league rules don’t allow two teams in the same division.

The battle at the top for me will be between last year’s runners-up and third placed teams, Vale and Mill Celtic. These two have Premier Division ambitions and I can’t look past them for a winner, with maybe only Ardattin putting a run together to stop them.

Both Vale and Mill have experience in this division and know what it takes to get promoted but Ardattin have the players who have played at the top level and could be the surprise package. Castle Rangers could be another outside bet after they registered 12 new players, some New Oak B and some from Kilkenny so if they can gel them all together quickly and get off to a fast start they could be this year’s dark horse. I reckon the two promoted sides St Pats B and Bagenalstown will be mid-table along with Baltinglass and Parkville who are hard to beat at home. Both Pats and Bagenalstown are used to winning after last year and know what it takes and don’t be surprised if they take points off the big teams. Baltinglass and Parkville have experience in this division and know what it takes to stay up. That leaves Crettyard B and Killeshin B who in my opinion will be left to fight it out for relegation. Crettyard will always struggle early doors and Killeshin found it tough last year in division 2 and the addition of the third team forcing them up could just be too much.

Harry Predicts: Champions – Vale Wanderers (So close but yet so far is the story for Vale the last couple of seasons, runners-up twice in the last two seasons, I think this is their time. A young squad that is starting to mature with the addition of some of the youth players that have won back to back titles in the Youths Division should see them over the line and expect them to compete in the Premier Division next season. Mill and Parkville B will both push them close though)

Relegation – Killeshin B. They struggled in Division 2 last season so the likelihood of them being able to compete in Division 1 next season is minimal.

This division is traditionally the hardest to predict but this year I’m going for Burrin Celtic to win the league at their ease. I may have put a jinx on them but with their new grounds and all their old players like Clarke, Smith, Feeney, Tracey and O’ Connor coming back to them they should way too strong for anybody else. I thought I had inside knowledge, but the twitter users seem to have agreed as they were the clear winners in the poll we created. The interesting part here is that I didn’t consider a very young Joseph’s side for the title and they took to twitter in their big numbers to complain and we created a new poll with four more teams and Joseph’s won this, their young side feel very confident about themselves. I will be following them closely to see if their performance matches their confidence. Hanover B, Vale B, Round Towers will look to build last year’s good showings and will be in with a chance of winning this league. Last year everyone took points from each other and when we took St Pats and Bagenasltown out, the other nine teams were only separated by six points so this will certainly be a close fought league if clubs can stick with Burrin. Nurney, Slaney B, Killeshin C and Baltinglass B make up the numbers and will be looking to improve on last years performance.

Harry Predicts: Champions – Burrin Celtic. They were the team best before lockdown behind the top two and will be fancied to win but Vale B and Hanover B will be right on their tails.

The Youths Divison is a hard league to predict with some teams fielding the same squads as last year and some moving up from the juvenile league. For me, the top four will be the old stalwarts Vale and Parkville, who have so much history with winning this league, closely followed by Crettyard and Killeshin, who had strong squads last year. I think these four will be strong for the rest and the winner will be whichever one of these picks up more points in these top four games. Hanover have great record at U15 and U16 past few years and could be a dark horse so do not be surprised if you seen them near the top. I certainly would not bet against them given they won the U15 All-Ireland two years ago. St Pats and New Oak return to us after being absent from youth level for a few years and it’s great to see them back. They are a bit of an unknown and we will be following them closely to see how they go. Our final team, Bagenalstown, struggled last year and will be hoping to make big improvements this year as there young side should have more experience. 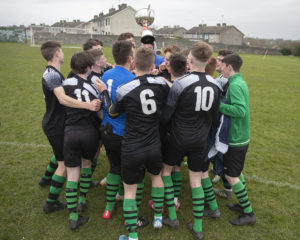 Vale Wanderers will be looking for a third Youths Division title in a row
Photo: Thomas Nolan Photography.

Harry Predicts: Champions – Vale Wanderers. It’s hard to look past Eoin Johnson’s side for a third title in a row but with some of the members having graduated from youth ranks, it may be time for someone else. Hanover and Crettyard will certainly push them close and Hanover could well claim it with some of their U15 and U16 ranks graduating up to youth level, plus they did well to reach the LFA semi finals so it may well be their turn.

This seasons women’s league promises to be a great battle with last year’s top three – Thomastown, Hanover and Mill Celtic – out to prove they can win it after the league didn’t finish. It was a real fight between the three of them with some great games last year and it was looking like a three way play-off before lockdown came. This year sees the addition of Freebooters from Kilkenny and the return of Crettyard, who have many titles to their name, meaning it could be a five horse race with some great battles to come. The remaining three St Fiaccs, Vale and New Park have all improved as well and will be looking to build on their good form last year, making the ladies division another hard league to predict in what should be a great year for ladies soccer.

Harry Predicts: Champions – Hanover Harps. On paper, Pa Dowling’s side should have too much for the rest of the league.