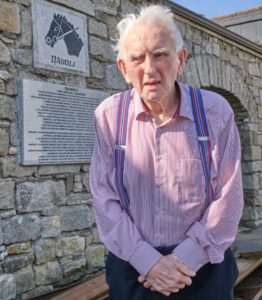 OVER the years, when a player was injured in a football or hurling match, having sustained an obvious bone injury and needing urgent attention, I often heard it said that “we will have to bring him to Danny Neill of Myshall straight away!”

Danny O’Neill, Hollybrook House, Myshall, Co Carlow, who celebrates his 90th birthday today (Tuesday), is a legend in his own lifetime, having carried on the family bonesetting tradition for the past 60 years. The fallout from the dreaded coronavirus in March meant that Danny, acting on medical advice, had to call an immediate halt to his bonesetting practice. In common with many aspects of Irish life, Danny found himself in lockdown and, in his case, a serious question mark remains over whether he can continue along the work path he has trodden over the past six decades.

Given his age, Danny is obviously vulnerable to the virus and is, in a real sense, one of those people ‘on the front line’.

The O’Neill bonesetting gift goes back throughout the generations. Old timers in the Myshall area during the 1960s speculated that the gift was with the O’Neills for up to 400 years. In living memory, Danny’s grandfather Johnny O’Neill and his uncle Pat O’Neill were bonesetters.

Born into a farming background, Danny farmed for the best part of five decades on a mixed holding, and since his retirement in 1999, the farm has been managed by his son Jimmy.

Danny is married to Tess Maher from Ballylean, Ballon and they have seven children and 19 grandchildren. Tess trained as a nurse in Dublin’s Mater Hospital and then undertook a one-year course in midwifery at The Coombe.

Tess never nursed. Cupid struck when, on one occasion, Danny was among a group of people invited to the Maher home, where Tess was serving food to the guests. She struck up a conversation with Danny, romance blossomed and on 24 June 1964 they married in St Patrick’s Church, Rathoe – at the time work was in progress on Saints Peter and Paul Church, Ballon, Tess’s local church.

The marriage ban on working wives was in effect at the time, so Tess could not pursue her nursing career, but she was more than happy to become a home maker and a tower of strength to Danny.

Danny O’Neill has dealt with fractures, displaced bones and probably the full range of ailments relating to the 302 bones in the human body over a working life, providing relief from pain for people young and old ‒ men, women and children.

Wife Tess, acting as a conduit for this interview with her husband because he is hard of hearing, said: “Sure Danny has dealt with people from every part of Ireland and also from many outside the country.”

He has treated people from as far away as Italy and spent time with the Italian family in question. And his bonesetting expertise does not just extend to those with two legs. It is not unusual for farmers to pull up with horseboxes into the O’Neill yard, their mission to have a horse or a cow with some type of bone ailment sorted out through the expertise of Danny O’Neill.

Over the years, people in need of medical attention often found themselves in a long queue at the O’Neill homestead. It was a matter of waiting your turn to be treated by Danny.

This article is something of a scoop for The Nationalist because throughout the 60 years of his bonesetting practice, Danny O’Neill never consented to a media interview about his gift for healing. He felt no compulsion to go into print, preferring to rely on word of mouth, which spread the gospel of his medical deeds. But that reluctance to go on the record all changed with my phone call to wife Tess, who felt it appropriate to mark her husband’s 90th birthday!

In a sporting context, Danny O’Neill, whether he wished to or not, hit the headlines along with daughter Olivia through their joint ownership of the great thoroughbred horse Danoli.

The name Danoli was an amalgam of Danny and Olivia and he was best known for his successes in hurdle races, although he also enjoyed victories in steeplechases later in his racing career. Danoli was described as the most popular racehorse in Ireland during the 1990s and was regarded as ‘The People’s Champion’.

Mum Tess says Olivia currently owns a filly, which she hopes will bring some racing success in the future. So could a successor to Danoli be in the making?

Outside of the sport of kings, Danny O’Neill was a keen supporter of Gaelic games and has been a avid follower of the fortunes of the local Naomh Eoin and Myshall camogie club in hurling and football. Tess, rearing seven children, did not have the time to devote to GAA games, but did enjoy watching the scraps between Myshall and Kildavin on the football field.

Danny and Tess O’Neill were avid card players – a pastime that has fallen by the wayside due to the Covid health restrictions. Tess recalls: “We played whist three nights a week in Myshall and Rathoe, with an occasional ‘hand’ in Bagenalstown. And when the whist drive was over there was a poker school from 11 o’clock until 1am.”

Danny was a very good card player and loved the atmosphere around it. “We greatly miss the cards in the current situation,” said Tess.

As mentioned earlier, the O’Neills have seven children ‒ Dan, Mary Clancy, Jimmy, Gretta Nolan, Claire Butcher, Olivia Jordan and Treasa Nolan. Tragedy visited the family in February 2016, when Olivia’s husband Peadar Jordan, a member of a well-known and popular Myshall family, collapsed and died at the untimely early age of 44. Peadar, who hurled at senior level for Naomh Eoin and also with the Carlow county senior team, was the youngest in a family of 15 children of the late Andy and Esther Jordan. Olivia and Peadar have one son, Peter.

But to end on a bright note, today is a landmark occasion in the life of Danny O’Neill, a celebration of a life well lived, during which he provided an important service through his gift to ease people’s pain.

After a lifetime of service to his calling, no-one could deny that it is time for Danny O’Neill of Myshall to put his feet up and, in retirement, take things easy, looking forward to 22 September 2030, when this man with magic in his hands will hit the big 100! 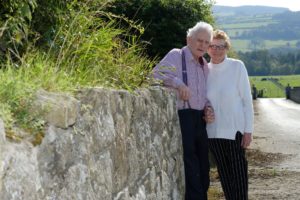 Danny ONeill, who is celebrating his 90th birthday, pictured with his wife Tess on their farm in Myshall