AFTER 6 months away, the Nationalist Premier Division returned this weekend with some big ties and it’s safe to say that the managers are looking forward to the coming season.

Patrick Brennan’s Crettyard have gone three seasons without a league title in the club, something unheard of for the most decorated club in Carlow League history. However, they have not been far away, their progress in the outside competitions a sign of what they are capable of. However, Brennan says they are stronger than they have ever been in his time in the club. “We’re in good shape, we’re reasonably happy with where we are. We fully expect to be in the shake up again, if not winning the league. I think the big thing for us is the emergence of some of the youth players, in particular, Shane Buggy and Luke Ramsbottom, they’ve really stood up in pre-season. For the first time, we really have competition for places, in midfield, in defence, up front, it’s great to see. The outside competitions have become our primary focus in recent years so we will be hoping to go far in them again this season.”

Hanover have struggled the past two seasons since winning the league with many of their title winning team having left. It’s been a rebuilding job from the men in black and this season will be about blooding some of the young players in the squad according to their manager, Paul Dowling. “We’re struggling for numbers at the moment and the whole club is training together because the majority of our players play football. The aim is to challenge New Oak and Crettyard which won’t be easy. We’ve a lot of young lads who are borderline at the moment, they’d be too strong for the Youths but it’s hard to play them two days on a weekend, you have to mind them. There’s some great players to come back from Wexford and Carlow-Kilkenny, there’s some with the Carlow-Kilkenny U-17’s who will be back permanently as there is no U-19’s team. It’s a building process, we have 7 or 8 lads left from the title winning team and some fine young lads too so we’ll have a good mix. Last year was a tough year, three lads from the title winning team retired and four had long term injuries, if you take seven lads out of any team, they’ll struggle.” 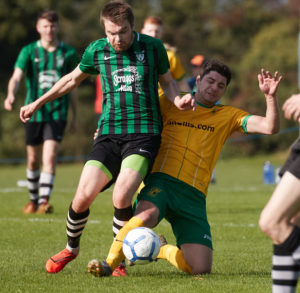 New Oak are defending champions of the Nationalist Premier Division and will be hoping that come May, they won’t be giving away their trophy. With the absence of a B team, many of the New Oak fringe players have departed the club in search of regular football whilst key midfield anchor, Craig Wall went back to Kilkenny. However, manager, Brian Quigley insists they will be as strong as ever. “Nothing’s really changed since last year, we haven’t lost too many of our starting team and we picked up a couple and a few more to come in. We will be, as always, developing lot’s of youths with the senior team, several of them played in pre season for us and they’re well able to do that job. We expect to be right back up there again this season”

Slaney Rovers were the surprise package last season following their promotion to the Premier Division having won Division One the previous season. They took the league by surprise and by the time lockdown hit, they were top of the table, albeit Crettyard and New Oak had games in hand on them. However, manager Peter Kehoe reckons that teams will now be wary of them. “I think we’ll be much better on better pitches, our pitch has a slope on it and other teams don’t like that slope but we went into New Oak on a good pitch and drew 0-0 with them and they didn’t drop many points. We are missing a few players for the start of the season but we have some young guys brought in as well as some new guys so it’s a chance for them to stand up and stake a claim for a place in the team. I think teams will be more wary of us this season and that they underestimated us slightly. Now, there will be a price on our head and teams might be coming after us a bit so it’s going to be a challenge for us to stay there.”

Kilree Celtic are the new boys in the Premier this season having gone undefeated as they won the Division One Trophy last season. Manager, Michael Salter is realistic in saying that their ambition is just to survive this year but reckons that they will give a few teams a scare as they make their return to the top division for the first time in eight years “We’re as ready as we’re gonna be. We just want to survive this year, that’s our main aim. Anything else is a bonus because a lot of the lads have never played Premier Division soccer. It’s a big step up and it’s going to be a learning season. The step up doesn’ t worry me though, I think we’re well up for it. While our main aim is to survive, we’ll definitely give a few teams a surprise. If we can survive this year, we can build on it next year and introduce some young lads. They are going to lose a few games, if they lose some games back to back, I’m looking forward to seeing what their attitude is to that and how they regroup after it as they aren’t used to losing games. We’ve also had a lot of work done on our pitch so we have to make sure to justify that work now.”

It’s been a revolving door at Parkville over the past few years and whilst at B team and youth team level, there has been success, the Premier team has struggled and has not found its feet. However, new manager, Keith Halligan, a Parkville man through and through is hoping to change that and admits that this year is about rebuilding and trying to set a platform. “It’s back to the start and rebuilding as always. Realistically, mid table and settling everything down would be realistic for us. We have some good, exciting young players and then some older heads coming back in so it’s going to be a season of transition. It’s the start of a new cycle, I have a good group of players who seem to have bought in. I’m trying to marry the two teams together and get the best possible team we can have. You never know though if we end up losing a couple of games and the chips are down but we’re hopeful.”

Killeshin manager, Micheál O’Rourke says that on paper, his team should be nowhere near relegation but that consistency in team availability will be crucial. “We’re not looking too bad, we have what we had last year and we have a couple of youth players that are capable plus an extra couple from the college who are good players and anyone injured last season is fit. We have more of a consistent, more together squad this season, there’s a better feeling around the group which hopefully means better football so we don’t end up where we were last season. We never had the same XI every week [last season], we were training fine but in terms of having a squad on a Sunday, you never knew who you were going to have so that is the main thing we need to focus on this season, constant consistency on who is there and who is performing rather than filling out a team sheet on who is available each week.”

Ernie Core is back at the helm at Dolmen Celtic this season and he hopes that players will buy into what he is trying to do at the club and realise their potential. “The boys finished mid table for the first time in the Premier, we’ve had a good pre-season, the boys are working. It’s a very young team, it’s looking very very positive at the moment, we’re looking forward to the season starting. We’ll be aiming to go as far as we can, we’ll take every team as a cup final, we’re not just there to make up the numbers, we’re there to upset the tart. If the boys put in the effort, they can go far, it’s a really great team there so hopefully it pays off on a Sunday.”

Ballymurphy Celtic’s manager, John Whelan, knows that his side will face an uphill battle to try retain their Premier Division status due to the size of the club but is happy to take underdog status and keep battling every week. “We’ve managed to keep ourselves in the Premier for the last three years, that’s always the goal. With the size of our squad, it’s a credit to the lads really. The easy thing to do would be drop down to Division One but we love the challenge and you can see the difference in three years, the experience they have gained by being in the Premier. We’re looking forward to getting started. We have what we will have, we don’t gain players throughout the season, all our players are based around Borris and Ballymurphy, we don’t get players from other clubs, what we start with is what we have and we don’t have the luxury of a big panel or A and B teams.”