THE Leinster League Division 1B campaign starts on Sunday next with a tasty looking opener at Oak Park, on Sunday at 3pm, where old rivals, Co. Carlow and Tullow face up to each other.

Last year Tullow did the double over Carlow winning 24-18 away from home and 19-12 at home. With the lock-down coming so near to the end of the league runaway league leaders, Monkstown, were promoted while out of form De La Salle, Palmerstown dropped out of the division.

The respective managers, MaurilCOce Logue of Tullow and Carlow’s Corey Carty say, that in terms of fitness, both sets of players have been looking after themselves like never before.

“We are up into the mid-thirties in training. The lads are saying they haven’t seen this in years. There is a certain buzz about this year. It is intangible. I really don’t know how to explain it,” says Carty.

Over in Tullow it is a slightly different situation. It is estimated the club are short nine players who are playing football and haven’t come back to Blackgates yet. It is a strange situation for Logue. He sees players who are fitter than ever but he cannot get his hands on them.

“Will Canavan has worked hard over the closed season. He looks really good. Then you have Shane Rohan. (both are playing with St Patricks). John Hanbidge is playing football in Wicklow.

“We are waiting on guys to come back,” says Logue. 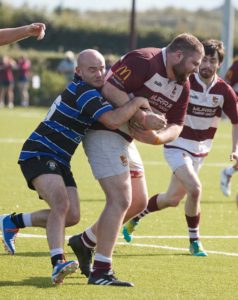 Co. Carlow’s final game in the South East League ended up with a heavy defeat to Leinster League Division 1A side, Gorey. Carty is not worried. With a number of players at home now he has a good hand to play from.

“A few lads are coming back who would have been in Limerick or Dublin but are studying at home now. Ross Elmes. Johnny Murphy is a tyrant in defence. Jack Hickey. The lads can’t wait to get going.”

Players and management teams have had to deal with the Covid issues. Logue articulates this.

“You get comfortable. You get used to it. You adapt. The players are certainly enjoying training,” he says.

Leinster League Division 1B has been divided into two pods with Tullow, Carlow, Wicklow and Cill Dara playing off against each other on a home and away basis.

Assuming the games are all played on schedule the second series of games start on Sunday December 6 with Carlow at home to Clondalkin while Tullow host Mullingar. Boyne and Longford are the other two teams in the division.