Intermediate and Junior Football Championship finals to be decided

THE Intermediate and Junior Football Championship finals will be decided this weekend but which of the eight teams battling for those final places will progress? KIERAN MURPHY looks ahead to the action, which starts tonight, and gives his verdict. 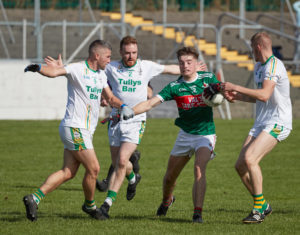 It was a shock when Éire Óg turned over Ballinabranna in the group stages by a narrower 1-8 to 0-7 margin than the score line suggests. Yet last Sunday Ballinabranna didn’t exactly shine when accounting for Clonmore in the quarter-final. They got over the line alright but will need to improve up front. Robert Sansom needs quality ball if he is to damage the Éire Óg defence, who will be even stickier than Clonmore were. Éire Óg have Simon Rea and Eric McCormack who will need minding and for sure Gary Dunne and Bobby Daly will be up for this one.

Even though they weren’t surprised themselves it was a shock when Fenagh beat Kildavin-Clonegal in the group stages. The Wexford border side are not convincing at the moment and it could be a legacy of their county final no show when they failed to turn up. Is there a lack of confidence in one of the pre-championship favourites? Daniel St Ledger, Pauric Hickey, Niall Murphy and John Kirwan have to answer that question on Sunday. Fenagh have young players who are humming. Sean Smithers, Keegan Bradley, Jack Tracey and Tommy Bric show no fear.

These sides met in the group stages with Leighlinbridge winning by 4-10 to 0-13. Aidan Lillis scored 1-4 that day while the All-Blacks have good forwards in Shane Farrell and Fiach O’Toole. They have won all their group games and Tinryland won their quarter-final with a less than convincing win over Rathvilly. Peter Hennessy, Mark Lawlor and Padhraic need to produce for Tinryland.

In the group stages Grange beat the Tullow side by four points and were good value for their win. St Patricks could have done with a better game and a bigger challenge in their quarter-final against Old Leighlin. It goes without saying the Grange backs will not give their rivals the same amount of space Old Leighlin gave them while the influence of John Murphy for Grange is immeasurable. Brian Byrne will supplement Jack Kennedy’s contribution for St Patricks. They could be outmuscled in the final stages by a Grange side who might just have an edge.