Tullow begin with away tie in Edenderry

THE Leinster League ladies rugby league kicks off on Sunday with Tullow facing a difficult assignment away to Edenderry, who have given them plenty of trouble in the past. Games are always close between the sides and Alex O’Brien, who is recovering from injury, expects a tough encounter. 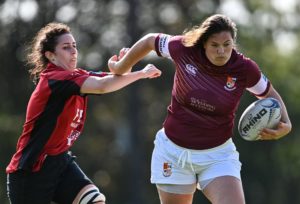 “They are very physical, very strong,” says the Tullow centre who is coming back from injury.

This year there was doubts about whether there would be promotion and relegation in the league but O’Brien says this will definitely go ahead. She is hopeful of having a good season.

“This year, compared to last year when we were struggling for numbers we have a big panel of girls who are really committed.

Jane O’Neill back from cruciate, Catherine Dempsey is available and Ciara Kinch is also staying on.”

Emer McDermott and Leanne Savage who have come into the squad.

“It is ok. Obviously we have to fill out forms. It hasn’t been too bad but I don’t know how it is going to effect the league when Dublin is in lockdown,” wonders O’Brien.

First team players, Keiaho Bloomfield and Paul Canavan are coaching the team with Cora Browne acting as manager. Alex says they could do with adding to the management team. If anyone is interested she can be contacted on 086 0743540