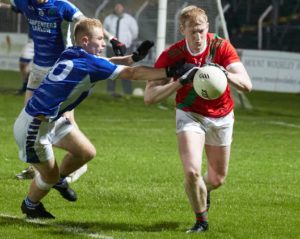 JJ Lambert, the O’Hanrahan’s manager, was critical of the decision to defer their quarter-final between Palatine and his club by one week. The game should have been played last weekend but, because of two Covid cases in the Palatine club, the decision was taken to postpone the match. The game was eventually played last Sunday evening and Palatine won 2-11 to 0-12.

Lambert said that he had no issue with Palatine but it was his opinion that if it had been O’Hanrahan’s they would have been thrown out of the championship. He said a number of people in clubs rang him and said they disagreed with the decision taken by the County Board.

“To actually play was a scandal. Five or six clubs in the county rang me to say we are being treated terribly badly,” Lambert said.

“If we had one Covid case we would have been fired out. Everybody in the county said we were treated very badly,’ he repeated.

“The County Board let us down big time. I must say I am very disappointed. We were very shabbily treated,” he insisted.

He repeated he had no issue with Palatine and that while it was disappointing to lose the better team edged a good contest.

“Fair play to Palatine. They won the game. We are disappointed but were forced into the position.”

Palatine youngsters live out their dream