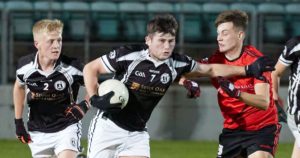 By Kieran Murphy
KILDAVIN-Clonegal mixed the good with the bad but it was enough to see off the challenge of a very young Fenagh side in the intermediate football semi-final at Netwatch Cullen Park on Saturday.
The Wexford border side were worthy winners but they made it hard on themselves. Playing into the O’Hanrahan end they were quickly on the scoreboard when Paul Nolan converted a first minute free. A patient build-up doubled the margin when Daniel Murphy found the posts twice in a matter of minutes they won good ball in defence, drew the free but had it overturned for something which happened after the whistle had been blown. Their line was going berserk.
While scoring was low in the first quarter at 0-2 to 0-0 it was still an absorbing contest. Nolan added a free on 16 minutes while Daniel St Ledger, wearing number eight on his back, but playing deep in defence he came forward to drive over a great long range point. A Daryl Roberts effort saw Kildavin-Clonegal take a 0-5 to 0-0 lead into the second half.
A Michael Murphy free 52 seconds after the restart got Fenagh into the game but the two St Ledger brothers, Robert and Daniel (free), replied with points of their own in a three minute spell.
It wouldn’t be the only time the two lads featured together in such a short space of time. Just on the second water-break Robert saw black for what was deemed a deliberate trip. When Fenagh delivered ball into the edge of the Kildavin-Clonegal big square, Daniel got his timing wrong and clattered into Dylan Bradley. It was one of those moments where he could well have seen red. Instead the relief was palpable when Paud O’Dwyer went with yellow. It was the correct call.
Having converted a free only three minutes earlier, Michael Murphy duly posted another to leave only four points between the sides. Shortly afterwards Fenagh almost handed their rivals a gift of a goal when they got their kick-out signals wrong. An alert Daryl Roberts intercepted when Fenagh went short. The goal was yawning in front of him but he didn’t get enough power into his shot and Packie Hughes dived full-length to concede a 45.
Kildavin-Clonegal still turned the screw when Daniel St Ledger converted the resultant 45. Two frees from substitute, Joe Roberts, put the eventual winners six clear.
There was time for drama. Deep into injury time Michael Murphy stood over a 20 free for Fenagh. He had to go for goal. A massed Kildavin defence knew that too. Yet the centre-forward found the net with a rocket into the top left hand corner.
The Moll Bennetts need possession from the kick-out. Instead Kildavin-Clonegal got their hands on the ball. A patient build-up quenched any fears their supporters might have been having and Liam McGuill obliged with the insurance point. It shouldn’t have been that close in the end but that is what championship fare can do.
KILDAVIN-CLONEGAL: Ronan Brennan; Barry Hickey, Donal Hickey, Gavin Byrne; Niall Hickey, Liam Roberts, Liam McGuill (0-1); Daniel St Ledger (0-3, 0-1 free and 45), John Kirwan; Daniel Murphy (0-1), Owen Roberts, Paraic Hickey; Paul Nolan (0-3), Robert St Ledger (0-1), Daryl Roberts (0-1). Subs: Joe Roberts (0-2 frees) for P. Hickey (45 mins), Paul Kelly for N. Hickey (48 mins), Cillian Redmond for Nolan (58 mins), Ian St Ledger for O. Roberts (61 mins).
FENAGH: Packie Hughes; Luke Bradley, Tommy Bric, Jack O’Connor; James Cummins, Jamie McCabe, Pat Hickey; Mark Foley, Keagan Bradley; Colin Byrne (0-1), Michael Murphy (1-4, 1-2 frees), Cormac Lomax; Dion Wall, Dylan Bradley, Sean Smithers. Subs: Ciaran Whelan for Hickey (39 mins), Conor Treacy for Foley (59 mins), Michael Ryan for D. Bradley (62 mins).
REFEREE: Paud O’Dwyer (Palatine).