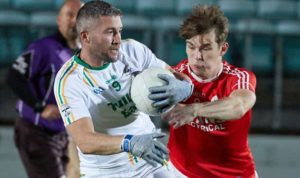 BALLINABRANNA produced what was near enough their best performance of the season so far in this intermediate football semi-final in Netwatch Cullen Park on Friday when they comprehensively out-played Éire Óg who had beaten them in the group stages earlier in the competition.
From a long way out it was clear there was only going to be one result. The eventual winners were hungrier, meaner in the exchanges and in Robert Sansom they had a target man and play maker up front. That might be a bit unfair to the rest of the players as this was very much a team victory.
One particular moment in the second half defined the Ballinabranna attitude and illustrated their desire to stamp their authority on the semi-final. When they released the ball in the direction of their own Gary Dunne, the intended target was slightly behind the Éire Óg centre-back, Cathal Kelly. Dunne was not favourite. Yet, in the seconds it took for the ball to arrive between the two players the Ballinabranna centre-back had edged ever so slightly ahead of his marker and stole ownership of the moment. It was typical of the green attitude on the evening which mattered most.
The winners were still slow to start. That could have been down to the opposition too. Darren Lunney scored their first two points. The opener on six minutes when he cleverly got his fist to a loose ball which looped onto the crossbar and over. The second from a free.
While Eric McCormack had an opportunity of a goal for Éire Óg which was saved by keeper, Adrian Brennan, it was all Ballinabranna.
Last week they didn’t deliver good ball into key full-forward, Robert Sansom. This time they did and the former Louth player punched home from close range. When he added another point from play his side were six clear.
Éire Óg kept them honest though and Eric McCormack shot two quality points on the left hand side which, at 1-5 to 0-4 at the interval, acted as a reminder to Ballinabranna that nothing is ever won until the final whistle.
They absorbed McCormack’s warning and within seven minutes off the restart a point from Kealan Brennan and two by Sansom all but had them in the final. Then a move from deep inside their own half ended up with full-back, Jimmy Cahill, go one on one with Johnny Furey in the Éire Óg goal. He found the net with ease and Ballinabranna saw out the final quarter without too much fuss.
To complete a bad night for the Reds right at the end Corey Harmon was red-carded for something that wasn’t too clear from the side-line. It didn’t matter at that stage. Ballinabranna were back in another intermediate final. However, when that will be played is anyone’s guess.
BALLINABRANNA: Adrian Brennan; Bobby Comerford, Jimmy Cahill (1-0), Bobby Daly; Colin Byrne, Conor McNally, Darren Geraghty; Ben Dorgan, Michael Jackson (0-1); Rory Hurley, Gary Dunne, James Kehoe (0-1); Kealan Brennan (0-1), Robert Sansom (1-4, 0-2 free and mark), Darren Lunney (0-2, 0-1 free). Subs: Jamie Lunney for McNally (39 mins), Damian Sheehan (0-1) for D. Lunney (50 mins), David Cox for K. Brennan (54 mins), K. Brennan for Hurley (60 mins).
ÉIRE ÓG: Johnny Furey; Shane Kelly, Mark Daly, Luke Fitzpatrick; Adam Nolan (0-1), Cathal Kelly (0-2), Eoin Maddock; Dean Hayden, James Brennan; Shane Buggy, Simon Rea, Cathal Myers; Eric McCormack (0-2), Kyle O’Byrne (0-1), Mark Kelly. Subs: Ben Crotty for Myers (21 mins), Corey Harmon (0-1 free) for McCormack (35 mins), Craig Whyte for Hayden (43 mins), Dan Crotty for Brennan (50 mins), Conor Walsh for M. Kelly (59 mins).
REFEREE: Jonathan Murphy (St Mullins)