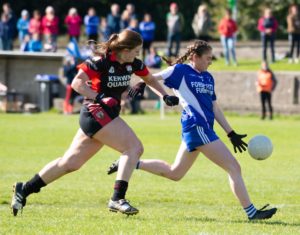 Rachel Sawyer on the way to scoring Old Leighlin’s second goal against Shanahoe in an earlier round of the competition
Photo: Adrian O’Neill

A first minute goal from Old Leighlin’s Emma Brennan set the Carlow side on to way to a first Ladies Leinster Intermediate Football final, following this fully merited six point semi-final win over Royal Gaels of Dunshaughlin at the latter’s ground on Saturday.

This result sets up a final against Tinahely of Wicklow, it was due to be played this coming weekend but the GAA’s decision to suspend all club games means the girls will have to wait a while long to play that game.

Old Leighlin took to the road for the first time in their championship campaign, having enjoyed home ground advantage in their previous wins over Shelmaliers of Wexford and Shanahoe (Laois).

That early Old Leighlin goal was a huge boost to the visitors and the trend of the game followed that of earlier rounds as they took early control, putting the scores on the board and setting their opponents the task of trying to rein them in, something that proved beyond the home side.

A second Old Leighlin goal from their prolific full forward Rachel Sawyer saw the ladies in blue and white lead 2-1 to 0-21 at the first water break. The Carlow ladies were playing with the strong wind and in the second quarter they had points from Rachel Sawyer (free) and white flags out of play from Aibhinn Gilmartin and Niamh Forde. But The Royals had outscored the visitors by 0-4 to 0-3 in that quarter, which left Old Leighlin leading 2-4 to 0-5 at the break.

The second half saw Old Leighlin put to the test playing into the elements. But their defence and midfield stood firm in stemming the attacks of the home side and it was a third goal for the Carlow ladies from Aoife Gilmartin proved vital as they established 3-5 to 0-7 lead at the second water break. The final now beckoned for the Carlow ladies.

The fourth Old Leighlin goal from Rachel Sawyer put the seal on the Carlow champions victory. Although the Royal Gaels did breach the Old Leighlin defence for their goal, the visitors had sufficient in hand to see out the game amid a flurry of late scores.

It was not by any means plain sailing for Old Leighlin in that second half as they suffered two sinbins to two of their top players – forward Emma Brennan and Rachel Sawyer. But the spirit within the team surfaced again and the players worked really hard to protect their lead during the 20 minutes period when they were reduced to 14 players.

The Old Leighlin defence was well marshalled by team captain Ann Roche at full back and centre back Ellen Atkinson while Keeva Collins was very effective at right half back. Caoimhe O’Neill and Helen Roche got through a huge amount of work in midfield providing great support to the defence and providing a regular supply of ball to the forward line while Aibhinn Gilmartin, Emma Brennan and Rachel Sawyer kept the scoreboard ticking.

It is a measure of the confidence that team manager Barry Hayes and his backroom team have in this team that the same 15 players have taken to the pitch for their three games to date. It is also notable that this Old Leighlin side has an eye for goal, having raised a total of 10 green flags while only conceding two.

For a gallant Royal Gaels side Niamh Gallogley, Niamh O’Sullivan and Meabh Byrne were best in a losing cause.

‘They are a fantastic bunch of players’ – Forde