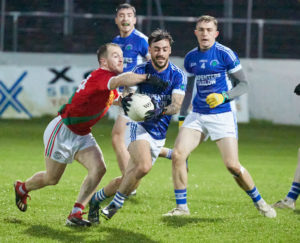 A brilliant first minute goal scored by Palatine’s Cathal O’Neill hung over the O’Hanrahan heads like an albatross in this deferred senior football championship quarter-final at Netwatch Cullen Park on Sunday.

A misty rain fell throughout but it didn’t affect the players one little bit as they served up an entertaining encounter for any neutrals who attended or might have watched it through the Pairc TV streaming services.

The big worry for Palatine was how they would react to the Covid scare when they had to restrict their movements after two of their players tested positive after their third round game against Tinryland.

O’Hanrahan’s had their concerns too and the loss of Leigh Walker through injury deprived them of a quality forward who would get onto almost any club team in the country.

The eventual winners shrugged off any suggestions of cobwebs when a fabulous move down the right towards the tunnel end saw Jamie Kenny take possession in front of goal. He could have shot himself but he off-loaded to Cathal O’Neill who was going like an express train. The half-forward didn’t have to make any decision as he cleanly took possession and fired home from just outside the small square.

Playing with the wind, O’Hanrahans enjoyed a spell of dominance. Who knows how Palatine would have reacted if a shot from Mark Davies went underneath the crossbar instead of hitting it and flying over? The sides were level on nine minutes thanks to points from James McGrath and Davies once more.

Palatine then enjoyed a spell in the ascendancy where Conor Crowley, Andrew Kehoe (2), Tomás Kenny, David Reid and Shane O’Neill all raised white flags. Just before the break Cian Dowling and Davies picked off important points for O’Hanrahans.

Against the breeze in the second half it was asking a lot of the Blues to overturn their 1-5 to 0-4 half-time deficit but they were up for it as Danny Thompson fired over a 31st minute point. Shane O’Neill’s long range free cancelled that out but Chris Bermingham and Thompson registered further points. Yet that early goal was proving to be a saviour for Palatine as their rivals could never get their noses in front.

David Reid had a goal chance for Palatine but a brilliant block from Justin O’Brien saved O’Hanrahans. The second goal came on 43 minutes, when another Palatine move, this time a more methodical build-up, saw Jamie Kenny in possession once more in front of goal. He had a chance himself but he made doubly sure when slipping the ball to Conor Crowley and he found the net.

That was the killer blow. Leading 2-9 to 0-11 at the water break Palatine connections couldn’t quite relax but they were in the driving seat. The players on the field did what they had to do to quench any suggestion of a late O’Hanrahan comeback. It was a fraught week for the winners. Now at least most of all the talk in the Bennekerry parish will be about football.