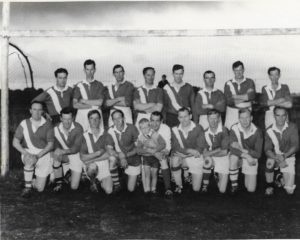 The photo was given to Tom by Liz Connolly Byrne, daughter of Paks Connolly of Clonmore, Carlow and Leinster football fame. The late Paks is in the photo, standing second from the right.

The snap has a certain mystery surrounding it as it has the appearance of perhaps being a Carlow senior county football team from the early 1950s – but there is no certainty about that.

The mystery surrounds the jerseys the players are wearing – which appear to be the green of Ballymurphy from the south of the county, with the distinctive white sash.

What is certain is that the photo contains a number of Carlow county footballers from a variety of clubs around the county.

Another query surrounding the black and white picture is  where it was taken. It does not appear to have been at Dr Cullen Park. The crossbar and stanchion to the left don’t appear to concur with Carlow GAA headquarters.

My best guess is that it was taken in the McGrath Park, Bagenalstown.

Can any of our readers throw any light on the photo and, if so, provide the names of the players?

The old photo is part of a store of GAA memorabilia in Tom Kehoe’s possession, including many old All-Ireland senior football finals, including the final with greatest relevance to Carlow football followers – the 1944 decider between Roscommon and Kerry.

The Kehoe programme collection also includes the 1946 All-Ireland final between the same counties and the Meath-Cavan decider of 1949, a year in which the Royals won their first Sam Maguire.

Another programme of interest is that of the Leinster football final between Laois v Kildare, a day in which the great Tommy Murphy of Graiguecullen, Laois and Leinster fame scored 0-8 of his county’s total of 0-11 from centre back in overcoming the Lilywhites.

Tom Kehoe’s programme collections also includes one that would surely be cherished by all Mayo GAA followers – it is from the 1951 All-Ireland football final when Mayo defeated Meath – the last time the westerners lifted ‘Sam’, despite many subsequent final appearances.

To finish on a Carlow note – Tom Kehoe also has a photocopy of a game in which he himself featured – the 1962 National Football League semi-final at Croke Park, when Carlow put reigning All-Ireland champions Down to the pin of their northern collars – the Mourne County prevailing by 0-13 to 2-5.

The contact number for any information about the photographs is 087 9814914.