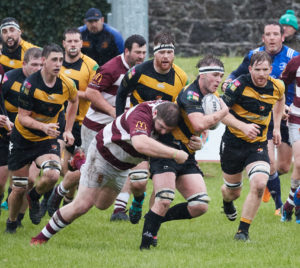 THE Tullow pack paved the way for this Leinster League Division 1B success in Oak Park on Sunday as the Slaneysiders came away with a bonus point win while depriving their arch rivals of a losing bonus point.

The rain came down from early on in the day and it never relented. It was a tribute to all the players that they were to produce a high standard game. While there were errors some of the handling was right from the top drawer.

Carlow full-back, Richie Whyte, had his kicking boots on and 7th and 10th minute penalties into the arch end of the ground had the home side on the front foot. Twenty minutes in, Tullow were awarded a scrum close to the Carlow line. They put the pressure on, worked the maul and Stephen Smith was credited with the try on the left. Paul Canavan added the conversion.

Tullow subsequently extended the lead when further pressure saw Willie Kelly crash over after the Tullow attack went left after setting up the back-line on the opposite side of the pitch. Canavan knocked over the tricky conversion.

Carlow responded with another Whyte penalty but the away side continued to pile on the pressure. They undid themselves on the Carlow 22 when they failed to win their own line-out. Not alone that, they knocked on and Carlow counter-attacked with a brilliant move going from left to right. Space opened up all over the pitch and the speedy Rory Carbery ran from inside his own half to dot down under the posts. The conversion was no problem for Whyte and from trailing by eight points at one stage Carlow now led 16-14 at the interval.

The home side had the edge early in the second period. There was some confusion when the referee awarded what seemed a penalty to Tullow near their own posts. It looked as if the match official had overturned the decision but, whatever was said, Tullow got back the penalty and cleared their lines. It was a key moment.

On 51 minutes Tullow won a lineout close to the Carlow line. This time their lineout worked to perfection and substitute, Louis Kilcoyne, was on hand to take an easy touchdown at the base of the maul. Canavan converted.

By this stage Carlow lived on scraps. While they enjoyed some possession they rarely threatened. Tullow just needed to avoid any calamity to keep their noses in front. Another key moment came when the visitors were defending a scrum inside their own 22. They got the shove on the Carlow put in and with it came the penalty. No-one was in any doubt now about the result. Whyte did kick a penalty to level the game but Tullow’s pack performance looked ominous for the black and amber side.

Buoyed by their previous little victory at scrum time, Tullow were awarded another penalty inside their opponents half. Canavan kicked to the corner. In a move almost identical to the previous one, Kilcoyne was on hand to score his second try.

With five minutes to go Tullow got the ball going forward. This time Canavan kicked an up and under into space. When the ball broke well for them the pack took it on again. This time Jack McDonald gathered and touched down. Two scores ahead Tullow saw out the game and Carlow were left to ponder.

There was a minute’s silence before the game in memory of Willie Anderson, who had connections with both clubs, who lost his life in a traffic accident on Saturday.

Also remembered was  Frank Corden, a former. Carlow club member, who was laid to rest earlier in the week.

O’Brien and donor give €80k to Tullow rugby club