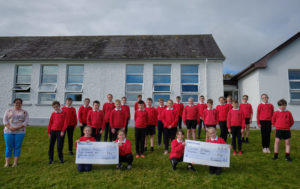 Pupils from 5th and 6th class at Kildavin NS presented the proceeds of their virtual coffee morning to the County Carlow Hospice and Carlow/Kilkenny Homecare Team, pictured with their Principal Gillian Murphy Photo: michaelorourkephotography.ie

WHERE there’s a will there’s a way for the kind-hearted pupils of Kildavin NS, who turned to the virtual world recently to support two very worthy local causes.

At the school and all over the Kildavin community, the children, their families and their friends generously raised a cuppa together while apart at 11am, resulting in an impressive total of €1,692.

“Traditionally we would hold a coffee morning in aid of the local cancer charities every year in Spellman Hall, but with Covid-19, of course, gatherings were not allowed this year,” explained Kildavin NS principal Gillian Murphy.

“We were also very conscious that there had been no Daffodil Day and the charities weren’t getting the funds they normally would so we all wanted to do something. The children were adamant … so as a school we decided to think outside the box,” she adds.

The result was [email protected] on Friday 25 September.

The children in fifth and sixth class at the school sent out an email to all 68 families in Kildavin NS, encouraging them to use their own WhatsApp groups and family members to hold their own individual coffee mornings.

Each of the 100 children in the school gathered donations from their own family groups and then, using the school’s Aladdin payment system, were able to lodge their totals online without the need for cash in the school.

“The board of management gave us permission to use the Aladdin payment system so people could make their payments through their cards and that worked really well,” explained Gillian.

The busy Kildavin children also took to their own kitchens the day before the event to create buns, cookies and various treats, then generously dropped them on the doorsteps of lucky [email protected] participants.

The terrific buzz of excitement in the school that day created enormous goodwill as the children enjoyed their own cuppa and baked treats. Fifth- and sixth-class pupils also rang Catherine Quinlan, nurse manager of Carlow/Kilkenny Homecare Team, and Ann Byrne of Co Carlow Hospice to let each of them know that a terrific €846 was winging its way from Kildavin NS.

“We had the ladies on speaker from my phone in the classroom and it was just lovely for the children to hear how much the money meant to these charities and how incredibly grateful they were to the children and their families,” said Gillian.

“The emphasis in the school since they have come back has very much been on their wellbeing, our health and looking after one another. The virtual coffee morning created such positivity and goodwill among the children; it really showed how giving back and volunteering can have such a positive impact,” said Gillian.

“Children are so resilient, but we are conscious that there is so much at the moment we can’t control and so many of their activities that have been stopped that we have been making sure some of those activities can be done safely in the school setting, where they are allowed,” explained Gillian.

With that in mind, Kildavin NS has organised dance classes, gymnastics and various other activities for the children to enjoy in school, keeping spirits, optimism and goodwill high despite all the challenges people are currently facing.

“I’m determined that if they can’t have fun outside of school, they’ll have it in school … that’s my mission,” said a resolute Gillian.