Ed Byrne has been named in a 35 strong Irish squad to complete to final two rounds of the 2020 Guinness Six Nations Championships.

The team will be captained by Johnny Sexton and the former Carlow underage player is one of six uncapped players in the panel. Ryan Baird, Will Connors, Shane Daly, Hugo Keenan and Jamison Gibson Park are the other five. 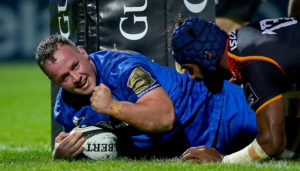 Ed Byrme is thrilled with his first international call up
Photo: ©INPHO/Tommy Dickson

While Baird and Connors have been involved in national camps before it will be a first time with the national squad for the other uncapped players. Daly and Keenan have both been in the Ireland 7s squad.

Ireland play Italy in the Aviva Stadium on Saturday 24 October before facing France in Paris the following Saturday. In a Six Nations championship which came to a halt because of the restrictions due to the Covid crisis, Ireland are fourth in table one point behind Scotland and four behind England and France who have all played an extra game.  In February Ireland had wins over Scotland (19-12) and Wales (24-12) before losing to England (12-24) in Twickenham.

After a successful couple of weeks with Leinster winning the 2019-20 PRO 14 to make it three on the trot, the Leinster front row player was hopeful of getting into the squad.

He was in the shop window for selection.

“I was delighted to get the nod. You never know with those things. I was hoping to keep my best foot forward in the games since we came back from lockdown, praying I was doing enough to be seen,” he said. “I can’t wait to get into camp now. I am going to enjoy it hopefully.”

The end of the 2019-20 season was a bitter-sweet affair for Leinster. They started badly against Saracens in the European Cup semi-final at the Aviva Stadium in September to trail 22-3 but got back to within five points. A late Alex Goode penalty ushered the English side over the line (25-17).

The week before the European showdown, Leinster had decisively beaten Ulster (27-5) when winning the PRO 14 three-in-a-row. Byrne said the celebrations had to be put on a slow-burner at the time but now, they can look back with pride and satisfaction of an excellent 2019-20 season even if it was divided into two parts.

“We had worked very hard to be in that position. It would have been lovely to be unbeaten in all competitions but the Saracens game taught us a few lessons. Hopefully we can bring what we learned from that defeat into this season.

“It was brilliant. It was a really special day to do three in a row in the PRO 14. It was a big milestone. It was a tricky one with the Saracens game the week afterwards but now two weeks past it we can look back on it, know it was special and there were a lot of positives to take from the season as a whole.”

For the first time in months, Leinster actually played in front of a crowd of around 1000 at the Stadio Monigo at the weekend. Byre agreed it was a welcome change even if they were playing away from home.

“100%. They actually created a great atmosphere in fairness even if there was only 1000 in the stadium. It was strange to have people in the stadium but it was a welcome return and it was good to get a bit of noise around the place.”

Now it is upwards and onwards for Ed Byrne and Leinster rugby.

“Going well with ten points from two games we want to keep building and keep improving,” he says.