NEWLY appointed Carlow senior football manager, Niall Carew, has hinted his side will adapt a more attacking and adventurous type of game than his side has used in the recent past. He was talking in the lead up to Carlow’s final national division four league game against Sligo at home on Saturday (throw in 5pm). Carlow are definitely out of the running for promotion but Sligo have a mathematical chance. 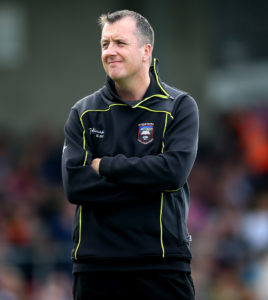 Carew’s side played Wicklow in a challenge match in Netwatch Cullen Park last Wednesday while trial games took place on Saturday. All this gives the manager, his new coach, Ger Brennan, and selectors, Simon Rea and Victor Doyle a chance to see who is and who is not in form.

“We are looking for a performance. We will be playing a little bit different than we are used to.

“We will be looking to see if they can adapt to the style of play that myself, Ger Brennan, Simon and Victor are looking for. Some lads can adapt very well to styles. Some lads can struggle. We are looking forward to that. The game hasn’t changed much anyway. You still have to win your own ball and if you don’t have it you have to get it back.”

Before the GAA ordered a cessation of club fixtures nationwide Carew had taken the opportunity to attend a number of games in Netwatch Cullen Park. Initially, it was feared he would have to do without players when the senior final was deferred for a week to next Sunday. Now the management team are playing with a full deck.

It is brilliant. Up to 48 players there at the moment,” noted Carew.

Everyone is back in. I still want to be fair to the lads who have come in and give them an opportunity.”

Carew has to cull the panel to 32 and then pick a team of 26 to play against Sligo. It wasn’t lost on him that many of the games in the Carlow championship were low scoring with even the champions, Eire Óg, at times registering less than a half dozen points in 30 minutes of football. Did this concern him?

“I wouldn’t say it is a worry. I did notice it but the good thing is all Carlow players are used to breaking down mass defences because they are playing it week in, week out.

“It is the way most of the teams set up in Carlow. A lot of teams play very defensively. Teams seem to get a lot of players behind the ball. If both teams do that you are going to get a low-scoring game anyway. That is what I would notice watching games.”

He says he has ideas to help Carlow penetrate opposition teams that play massed defences.

“We are planning to play a bit different to that but there is a place for defensive football. It is important. It is a skill as well. At the same time we are going to try and create more opportunities up front and try and keep a couple of more lads up there if we can.”