CARLOW’S first round Leinster Football Championship game against Offaly has been fixed for 1 November in O’Connor Park, Tullamore at 1.30pm 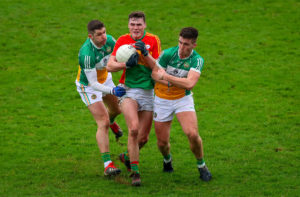 The Leinster Championship tie between Carlow and Offaly has been confirmed
Photo: ©INPHO/Tommy Dickson

Should Niall Carew’s team mark his Championship as Carlow manager with a win, they would be out again the following week against Carew’s native county, Kildare, on 8 November at 5.30pm in Portlaoise.

If Carlow can replicate the famous 2018 Championship win over Kildare a Leinster semi-final against Wicklow/Meath/Wicklow on 15 November.

Before attention turns to the Championship, Carew takes charge of Carlow in a competitive game for the first time when Carlow host Sligo in Netwatch Cullen Park on Saturday 17 October at 5pm. A preview of that game that game can be found here.