THE Carlow minor hurlers have a teak tough championship format this year which starts next Saturday away to Westmeath, in Kinnegad at 2pm. If they win that they are drawn to play Dublin away in the quarter-final. It is straight knock-out now with no back door routes. 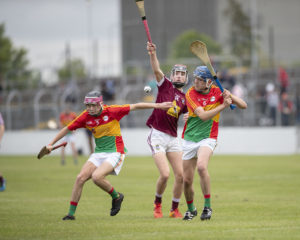 Christy Kealy, the Carlow manager, recalled that just before Covid put an end to sport in March his side were scheduled to play Meath with the winners going into a group format with Laois and Offaly.

“We were only ten days out from the first round of the Leinster championship when the plug was pulled on it,” the Mount Leinster Rangers clubman said.

It is the same for everyone nationwide but for counties like Carlow who have to scrap for wins it was a big let-down. While a lot of the good work done has not quite been lost the impetus and momentum has been halted.

“We had worked really hard over the winter and we were peaking for that match. It is a big downer. Other teams were a month to six weeks away from it. It was right on top of us. It is a pity. In fairness they kept it going,” said Kealy.

Players did indeed keep themselves active. They also got involved in on-line charity work. The minor hurlers joined with their football brethren and raised funds in the Stewartstown Foundation which was promoted by Dublin senior footballer, Dean Rock.

Last week any plans Kealy had for further challenge games went by the wayside when, with the exception of senior intercounty squads, the GAA put a ban on all outside the county challenge games.

Nevertheless, Kealy is hopeful travelling to the Westmeath venue. Last year the Lake County scored a late point to knock Carlow out of the championship in Netwatch Cullen Park. That was before. This is now.

Traditionally, at all levels, Carlow and Westmeath sides enjoy periods in the ascendancy against each other. The home side have the edge at the moment. Kealy says he is hopeful that will change and points to a nice ambience in the squad.

“They are enjoying their hurling. The club has just finished. We lost nine to ten weeks to the club. Over the course of the couple of weeks, since we have had them, it is coming together. I think they realise they are lucky to have any sport. They are a really good bunch. They are nice lads, dedicated and get on in each other’s company. What better way could they spend a couple of evenings.”

The match will be streamed live on the Westmeath GAA YouTube page https://www.youtube.com/channel/UCSrTjRzlC8fJaJV4XqcMMhw