THE 2020 club season has not been one to remember for Kilbride and Carlow player, Darragh Foley. Kilbride’s opening game against Éire Óg went by the wayside due to a Covid scare in the Kilbride club. They were forced to concede the points. They still had opportunities to save their season but narrow defeats to Ballinabranna and Naomh Eoin saw them eliminated. 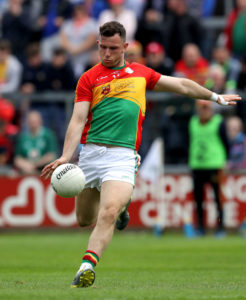 The Kilbride man totally disagrees with the decision to cease club games immediately.

“The GAA made a decision on seeing a couple of celebrations and people forgetting close contact. They had to do something in regards to that.

“They could have played off the championship behind closed doors. It is going to be very hard for lads who are not on a county panel for them to continue going training and not knowing when they will be playing a match. It is not fair on them.”

After beating Grange on penalties, St Patrick’s must have been on a high and looking forward to their junior A final. Ballinabranna and Kildavin-Clonegal players and connections were licking their lips at the thought of facing each other in the intermediate football final. Foley feels for them.

“You would feel disappointed for lads who are still involved (in their championships). It leaves them in limbo whether they are going to be played. They are training with their clubs and it is a nightmare for them. It is unfortunate for the lads involved it won’t be played off before the county resumes.”

Foley still had the intercounty set-up to come in to. He is thoroughly enjoying his involvement now.

“There is definitely a buzz back there. With the extended break we had given to us by Covid there was a lot of time there for lads to assess whether the hunger was still there to go in and play county football.”

As clubs made their exit from the championships potential and current intercounty players are getting their chances to wear the Carlow senior jersey.

“You can see there is because there were a lot of lads who were in there straightaway. They are very eager to get going in and want to play county football. It is great to see.”

Players could have been forgiven if they looked rusty and off the pace that intercounty players require. Foley says the players are going well.

“A lot of lads were sharp. You could see it in many of the games. The Covid period had lads working from home and gave them a chance to work on different things.

Lads who enjoy training were using the lockdown to get out and clear their head and stay active. That bodes well for Carlow,” suggests Foley.