AHEAD of the Carlow U20 hurlers beginning their Leinster Championship next Wednesday evening against Laois, manager Pado Flynn has urged the GAA to play the games as scheduled.

He stated that, under no circumstances, should the intercounty hurling and football championships be included in any future lockdowns which might be imposed on these islands. He says it is absolutely vital intercounty championships be allowed go ahead, pointing out GAA games mean more to the vast majority of sports followers than any other sport. 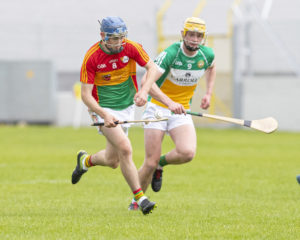 Carlow were beaten by Offaly in last year’s Leinster U20 Hurling Championship. Their manager Pado Flynn hopes his team can take to the field again on Wednesday evening
Photo: Thomas Nolan Photography.

He was speaking with the shadow of another lockdown looming. The last lockdown is still fresh in his memory.

“To be honest, they (the championships) have to go ahead and I am not saying it from a selfish point of view. I am saying it from a whole mental wellbeing view,” said the Kilkenny man, who is in his second year in Carlow.

“The country needs something to look forward to on a Saturday and Sunday. I know people will say there is rugby and soccer on but GAA is the lifeblood for anyone at this end of the country, if you know what I mean. It is the one thing which would bring a bit of happiness. Probably everyone in the country wants to hear The Sunday Game theme tune on a Sunday.”

He expanded his argument stressing The Sunday Game has been a way of life for so many.

“Particularly for older people who are going to be isolated. They would actually have something to look forward to on a Sunday evening. Something to talk to their friends too on a Monday or Tuesday whether it be by phone or a walk. Whatever. It would bring it right up to Christmas and would make it that bit easier and help people cope.”

Since coming on to the Carlow hurling scene Pado has attended games up and down the county. He has got to know the players and the structure of the local championships.

“The toughest three months I ever put in in my life was April, May and June this year. For those lads I won’t say they were cracking up but everything was taken from them. There was no certainty to life and for chaps 17 to 20 years of age that wasn’t fair either,” he argued.

Now so near to the start-up of the under 20 championships a Level Five lock-down is probable. That would cut out all sports.

“We had only started to get to know them ( in February). We had played a few internal challenge matches before the lock-down. The lads had come together and we had got some of the dual players involved,” said Flynn.

“It was taking off. We were due to take a break because the Bolger Cup (senior league) was due to kick-start. We tend to leave the under 20s alone at that stage and let them back to their clubs and their natural habitats.”

“You can look at it both ways. For everyone’s mental health it is something to look forward to and will make the winter shorter. In fairness to the GAA, everything is in place, in terms of no eating together after training and matches, lads are generally going straight to the pitch. For matches, you are only allowed 15 in a dressing room and only allowed in for a short period of time. For people who aren’t able to get out, people in their 70s and that kind of thing, I know the club matches were a big thing for people cocooning, the intercounty would be a big blow to everybody if that was pulled.

“There’s risks in everything you do in life. We know this is a big risk because we don’t know too much about it. I do think it’s good for people’s mental healh, the younger generation and the older generation, to have something to look forward to.

“It’s difficult and it’s a tough question to answer. All I can say from our end and the GAA’s end of things is that everybody is adhering to the guidelines. Life has to go on as well but at the same time we still have to be very careful,” said Carew.