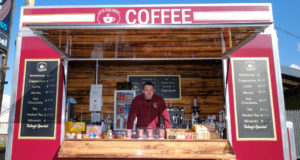 Musicians, roadies, sound and lighting staff were all immediately hit with the cancellation of concerts, but so, too, were all the ancillary businesses who service such events, including food trucks and coffee carts.

But rather than stay at home feeling sorry for themselves, some of these business owners thought outside the box. With no festivals or shows to go to, they set themselves up in their nearest town or village as people got used to the new normal and to socialising outside.

Cabin fever forced Ger Moorhead out of his house and onto the streets of Hacketstown. It was in the depths of the lockdown and the normally active Ger was frustrated and bored at home. Any other time, he’d be spending the early part of the year booking his coffee cart into shows all around the country, but 2020 wasn’t like any other year … ever.

“I bought it in 2018 and I was just getting established. It takes a long time to get established in this game because it’s so seasonal; 2020 was going to be my year,” Ger said.

Covid-19 restrictions initially shut down every hotel, restaurant, pub and coffee shop and so people had nowhere to go and no one to meet. But people are also sociable animals who need to be with others and they resented being cooped up. People like Ger used their imaginations and their resources to find a solution and the outdoor social experience was born.

“I was at home going crazy because of the lockdown. I thought it would be over in a few weeks and so I opened up the coffee trailer. Initially, I just saw it as a way to get out of the house and to make a few bob,” Ger continued. “I started in May for just a few hours a day and soon people were coming to meet up here. There was nowhere else to go, so it became an outlet, a place where people could be together. Now, it’s like we’re providing a service.”

One of the nicest aspects of serving the Italian Lavazza coffee to the good people of Hacketstown and beyond is the sheer diversity of his customers.

“Some people come here every day because they might live on their own and they like a chat. Students are now isolated at home studying, so they come, too. People dropping their kids off to school will call in the morning and older people who won’t go into any shops at all feel safe coming here. There’s one woman who comes here with someone, who must be her mother. This is the only place that they go to,” Ger smiles.

Serving coffee and tea on the Tinahely Road out of Hacketstown may have been a short-term solution in the beginning, but it’s now part of Ger’s life and it’s part of the town’s fabric.

“Every day I get up I look forward to doing this. There’s a great community spirit around, especially now. In normal times, I don’t think that this would’ve worked and I wouldn’t have tried it. Now it’s all about community spirit, we have to make the best of it.”

Let’s Talk About Coffee is open every day until 2pm in Hacketstown.