NIALL Carew’s time in charge of Carlow began with a win tonight in Netwatch Cullen Park after late, late scores from Paul Broderick and Darragh Murphy capped a thrilling finale. 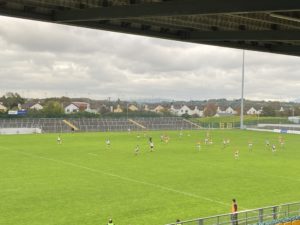 Carlow led by two going into injury time but it appeared as if it was Sligo heading for a dramatic injury time result when Liam Gaughan frees in the in the 73rd and 75th minutes pulled them level but there was still time for Carlow to land the scores to give Carew a dream start.

Sligo led 1-7 to 0-9 at half time and went five points clear early in the second half after a Red Og Murphy goal was followed by a Pat Hughes point.

Carlow responded superbly with a well taken Ross Dunphy goal and by the 52nd minute they were 1-14 to 2-10 ahead.

With ten minutes to go, Patrick O’Connor scored to put Sligo a point ahead and Murphy was shown a black card to reduce Carlow to 14 men as momentum moved against the home side.

However, they showed great character to take control of the game once more with a goal from Conor Crowley from his first touch after coming on as a sub and then a Chris Blake point.

That put Carlow in a strong position but three Gaughan scores in a row looked to have snatched a draw for the visitors but Carlow snatched the win with those two late scores.

Check out Tuesday’s Carlow Nationalist for a full report, reaction and photos from the game.