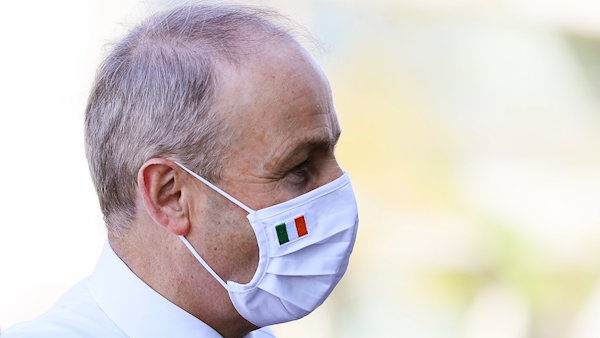 Deliberations have concluded for the night after political leaders left Government Buildings following hours of talks with senior public health officials today, in preparation for a decision on moving the country to Level 5 Covid-19 restrictions.

No major decision is expected this evening on the level of Covid-19 restrictions to apply to the country, with a Cabinet meeting now set for Monday according to a Government statement.

In a statement issued following the meeting, the Government said that the “overarching aim of protecting lives and livelihoods” was fundamental to the day’s discussions.

The Health team briefed Ministers that children were safer in schools, transmission rates are low, and that the continued opening of schools is very important to the development and wellbeing of children and young people.

“The CMO (chief medical officer) gave an analysis of the virus in each region of the country and chief executive of the HSE Paul Reid gave an assessment of current hospital response capacity, and an update on the test and trace system, which the HSE is continuing to expand,” the statement said.

“Presentations were also given on the economic, employment and society wide implications of moving to more severe restrictions. Other significant issues were also discussed such as mental health and domestic violence. Fundamental to the discussions was the overarching aim of protecting lives and livelihoods.

“The Health team briefed Ministers that children were safer in schools, transmission rates are low, and that the continued opening of schools is very important to the development and wellbeing of children and young people.”

Tánaiste Leo Varadkar was seen leaving Government Buildings just before 7.30pm this evening, while Taoiseach Micheál Martin remained in talks with the other members of Government until after 8pm when the meeting concluded, according to the Irish Times.

There is a growing expectation among some Cabinet ministers that the country will move to a higher level of restrictions in the coming days, but that it will fall short of the recommendation made by the National Public Health Emergency Team (Nphet).

Nphet has advised that every county move to Level 5 restrictions for six weeks to regain control of the disease. This level of restrictions means that everyone must stay within five kilometres of their home.

Government sources said that pushback is expected over some elements of the Level 5 recommendation, such as the closure of some sectors of the economy, the five kilometre rule and the recommended six week duration.

Chief executive of the Health Service Executive (HSE) Paul Reid said it was up to the Government now, as he left the building.

Crucial talks were held between senior Government members and public health officials from 3pm this afternoon after the Taoiseach met privately with the State’s two most senior health officials, Dr Holohan and Dr Glynn, before the wider meeting.

I don’t think we should be categoric and that’s why I’m keen to see all the figures, to see any evidence of further stabilisation, which is what we’d want.

Dr Holohan and Prof Nolan gave a presentation on their concerns over the rapid growth of Covid-19 to political leaders, while Mr Reid of the HSE briefed the group on hospital capacity according to the Irish Times.

Speaking on his way into Government Buildings earlier today, Mr Ryan said some counties seem to be holding steady: “There’s ongoing concern. In certain counties it has seemed to stabilise somewhat so I don’t think we should be categoric and that’s why I’m keen to see all the figures, to see any evidence of further stabilisation, which is what we’d want.”

There were eight new deaths and 1,276 new cases of the virus confirmed in the State this evening, in the fourth day in a row that new confirmed cases have hit four figures. There are 260 patients being treated for the disease in hospital today, with 30 in intensive care.

While it has been suggested that Level 5 restrictions could last six weeks, The Irish Times reports that senior Government figures have expressed concern that another lockdown could in fact last much longer, with major economic implications.

Nphet is understood to have written to the Government with warnings about what could happen if its advice is not followed. There is a high level of concern among Ministers, however, that the warnings do not take into account other health services or the economy.

Speaking in Brussels on Friday, Taoiseach Micheál Martin said the advice was “very serious” and had to be given proper consideration.

He said: “We’re giving this very active consideration, the advice. The situation is very serious.

“We will need further action in relation to this. When we respond it will be a comprehensive response.”

But he has not indicated whether Government will accept the advice, which has come following a week of record coronavirus cases on the island.

He said: “We’ve moved to Level 3 already, we’ve already said to people no visitors to your home.

“We have measures in place in Ireland that many European countries, even though they have higher figures than Ireland, don’t have in place.

“That said, we take advice from Nphet very seriously. This advice will have to be given good consideration. We want to have the situation well documented, well prepared.”

Mr Varadkar said moving to Level 5 restrictions would be “difficult” but did not rule it out.

He told reporters: “I’m not saying that it won’t happen or that it’s being ruled out or anything like that.

“I think a second time can be difficult for people, for businesses. There will be some businesses that maybe could survive losing three or four months revenue, but not another period.

“I think a lot of people who felt the social isolation back in the spring, that would be really difficult a second time around, particularly when we are into winter and bad weather and dark nights.”

As a further 1,000 cases and three deaths of people with coronavirus were announced on Friday by the Department of Health, chief medical officer Dr Tony Holohan urged people to cut social contacts to “an absolute minimum”.