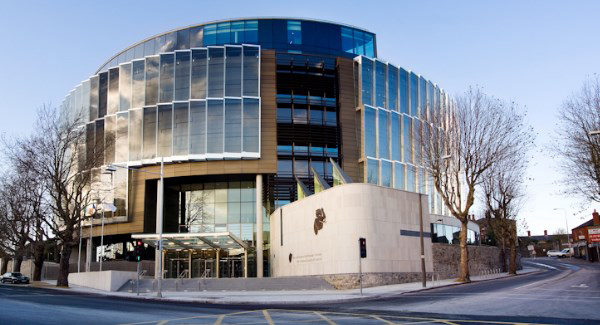 Two burglars have been jailed for their roles in a “nasty” break-in which culminated in them being restrained by the residents until gardai arrived.

Raymond Neeson (44) and Francis Duffy (43) were described by a security guard as “very much a handful” as the pair struggled to escape the apartment residents after being caught “red handed”.

Neeson assaulted three of the residents during the incident while Duffy attempted to pass him a shatter hammer and fire extinguisher as they were being restrained. The items were taken from them.

Neeson later spat blood in a garda car, broke a wing mirror and repeatedly defecated on mattresses and blankets in cells at the garda station.

He further pleaded guilty to making a threat to kill or cause serious harm to a garda and causing criminal damage to a squad car at Dundrum garda station. He has 176 previous convictions.

Judge Martin Nolan sentenced Neeson last Thursday to four and a half years imprisonment. He noted Neeson had a difficult history of deprivation and challenges but said the burglary was a serious crime and his behavior towards the gardai was unforgivable.

He noted Neeson has calmed down a lot and hoped something could be done during his time in prison.

On Monday Judge Nolan sentenced Duffy to two and a half years imprisonment noting that he had to accept Duffy played a lesser role in the offence, which he said, was a “nasty” burglary.

Garda Ronan Kennedy told Garett Baker BL, prosecuting, that Neeson and Duffy had gained entry to the apartment complex by following a resident in. They made their way to an apartment on the eight floor where a husband and wife lived and sub-let some of the flat to other Indian nationals.

The wife spotted Neeson in the apartment and called out for him to stop. She followed him to the hall and grabbed his backpack. She was assisted in holding him in the lobby by another resident, while a third resident held on to Duffy, who was a larger man.

Neeson held the woman’s hair and banged her against the wall in a hard manner. He also attempted to bite her but she continued to prevent him from leaving.

Duffy was crawling around the floor with a number of residents on top of him, a shatter hammer was taken from him and he passed a fire extinguisher to Neeson, but this was also removed.

Neeson punched another of the residents and kicked a third resident in the face as they restrained him.

The residents recovered all items taken from the burglars as they restrained them in the lobby. The residents said the men seemed intoxicated but didn’t know if they were drunk or on drugs

Gardai arrived and arrested the pair. Neeson spat blood in the patrol car and headbutted the window, leaving blood all over the interior of the vehicle. Neeson broke a wing mirror of the car as he was brought into the garda station.

Neeson defecated in a cell in the garda station requiring specialised cleaners to attend. Two days later he acted in an aggressive manner towards a garda at the station and again defecated and urinated in the cell.

Gda Kennedy agreed that the “appalling behaviour” of Neeson after arrest did not apply to Duffy.

Peter Le Vert BL, defending Neeson, said his client was a chronic drug addict with a long history of offending and homelessness. He said Neeson had been one of the first people to get growth hormone injections in this country at 13 years old but had ended up being targeted for his needles by drug addicts who gave him cash and drugs.

He said Neeson is currently doing the best he can under difficult circumstances. He said it was a crime of opportunity and Neeson had not set out to run amok.

Michael Hourican BL, defending Duffy, submitted there was a distinction to be drawn between the men and noted his client, who also suffered addiction issues in the past, had been charged with a lesser number of offenses. He asked the court to take all factors into account.

Fixing defective apartments could cost State up to €1 billion