MARK Furey has been an omnipresence in the half-back line on the Éire Óg team which has won the three-in-a-row (2017-19). That would usually mean he would be in the shop window for selection on the Carlow senior team. Yet in those three years he has only had irregular appearances in the Carlow jersey. An O’Byrne Cup and two league appearances in 2020 and before that one solitary league showing in 2018. Yet, on Saturday he played a full game and did well. 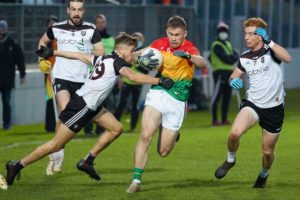 “It has been a slow build-up. In fairness Carlow have been flying over the last few years and I did my best to bide my time to get in there,” said Furey.

“Luckily enough I was in there today and I am delighted with that.”

It was the sort of game Carlow could so easily have lost.

“We haven’t been together that long since the club ended. It took a bit of magic from Ross Dunphy. It was a lovely finish and everyone dug deep and kept at it. You saw that in the last few minutes we were willing to drive on. We are delighted to have been able to push forward and get the win.”

Furey says Carlow contested everything that moved and didn’t allow the opposition easy ball in any corner of the field.

“It is a credit to our midfielders and our half-forward line. Even our half-backs we kept putting them under pressure. They found it very hard to get out. A lot of work has gone in on pressing and pushing high. Happy enough, it worked out. When we did get a good press on we caused them a lot of trouble.”

The Éire Óg and now Carlow defender is in the best shape of his life. He revealed that hasn’t come around by accident.

“Myself and the brother, Johnny, we had nothing else to do and we trained as often as we could. We were lucky enough we have a gym in the house so we were flat out there. In fairness the lads did a lot of their own work during the lockdown. I am sure they will keep tipping away.”

With another possible national lock-down around the corner Furey says players have not let the Covid pandemic get inside their heads. Especially when the club scene was postponed and his Éire Óg looking forward to a county semi-final.

“We were disappointed but we had to get over it quickly with the county starting. We had to put it behind us and move on. We will concentrate on county now and when it is over we will switch back to club. Everyone is still tipping away. If things turn sour lads will tip away and do their own thing. They are very good at that.”

Moore keen for good start to league against local rivals