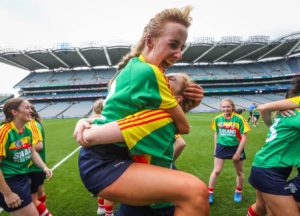 Earliest sporting memory: My earliest memory in conjunction with hurling is following Kilkenny with my father just at the start of Cody’s reign.

Memorable sporting moments: I’ve been blessed with some great memories over my years as an intercounty player. Sometimes I feel like I’m around so long even though I’ve only turned 25 I have a lot of playing behind me! Obviously the All-Ireland win in Croke Park and getting Player of the Year award the same year will always remain in my memory. However, there was something exceptionally special the camogie year previous to that (2015). The energy was so high and playing and excelling at Junior level really re-enforced how promising the year to follow was destined to be. I recall never feeling as fit or prepared to win.

Biggest influence on career: Hands down my Father, Eamonn

Sporting Hero: Tommy Walsh and in latter months probably as a result of Covid19 changing how we train, I’ve a new-found appreciation for people who train by themselves that are not part of a team and have nobody to answer to but themselves such as CrossFit athletes.

Most difficult opponent: Within Carlow, Kate Nolan, and at intercounty level, Katie Nolan of Kilkenny.

If I could turn back the clock: I’d learn to alter my expectations of others and reiterate to myself that how you treat others won’t always be reciprocated. Through no badness of their own but simply because everyone is different.

Memories outside sport: Many fond memories from my college experience. However, my fondest memories lie with both my grandparents. In latter years, especially, caring for my late grandmother, Maeve, a period in which I learned a lot about myself!

Favourite bar/restaurant: I’m a sucker for a good tapas date!

Three people you would bring to dinner (not family): John Lennon imagine! No pun intended, Sara Sigmundsóttir and Barack Obama

What would be heaven for you: To blend the best of both worlds! Win a big game and spend the celebrations with all those I care about past and present!

Also reflecting on the importance of the little luxuries given the current situation I’d love to treat ten of my best pals to a venture overseas to the sunshine!