PÁDRAIG Amond came off the bench and scored his first league goal of the season as Newport County continued their scintillating start to the new season with a 3-0 win over Bradford City on Saturday afternoon. 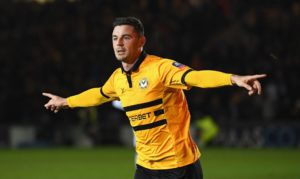 Pádraig Amond’s got off the mark for the season in League 2 as Newport County continued their brilliant start to the League 2 season with a 3-0 win over Bradford yesterday
Photo: Stu Forster/Getty Images

County took the lead in the first minute before Amond was introduced in the 42nd minute  due to an injury to Saikoh Janneh. He wasted no time in making an impact and just two minutes after entering the game the Carlow man curled a delightful effort from the edge of the box into the corner of the net, leaving Bradford goalkeeper Richard O’Donnell grasping at fresh air. Amond showed his delightful with his brilliant strike by racing back to the halfway line to celebrate with gleeful manager Michael Flynn. You can watch his goal and celebration here.

Newport wrapped up the three points with a 90th minute goal and they top the League 2 ahead, two points clear of Cambridge Utd. It means the team have set a club record of taking 19 points from the first 24 available and they have a chance to build on that with two home games to come in the next six days, against Colchester on Tuesday and then Harrogate Town on Saturday.

A good day for Amond was wrapped up by his former club Shamrock Rovers winning the Airtricity Premier League title and he took the time to tweet congratulations to club where he made his name.

Pádraig Amond writes a weekly column in the Carlow Nationalist and you can read his thoughts every Tuesday.