CARLOW’S Ed Byrne made his Ireland debut as Andy Farrell’s team beat Italy by 50-17 to set up a Six Nations final day shoot out next weekend. 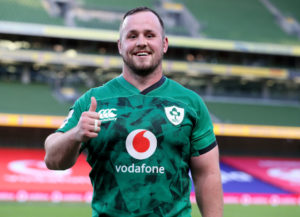 Thumbs up from Ed Byrne after he made his international debut for Ireland during the Six Nations victory over Italy on Saturday
Photo: ©INPHO/Dan Sheridan

Byrne entered the game as a 55th minute replacement for Cian Healy and performed well after his introduction.

Ireland scored seven tries during the game, including three from debutants Hugo Keenan (2) and Will Connors, to secure the bonus point win that was needed but with things looking so tight in the table, they may yet live to regret allowing a late converted Italian try.

Ireland currently top the Six Nations table on 14 points with England and France just behind on 13 points. Things could hardly be more finely balanced ahead of next Saturday’s games and Byrne will be hoping for the chance to play his part in another famous day for Irish rugby.