LEINSTER finalists Old Leighlin provide eight of the starting 15 as the Carlow Ladies football begin their All-Ireland Junior Championship campaign away to Wicklow in Baltinglass at 2pm today. 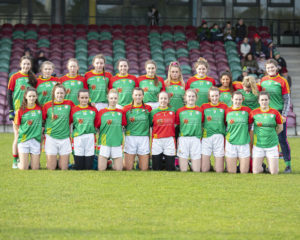 Old Leighlin provide the goalkeeper, four defenders, both midfielders and one forward to the team, while Fenagh, Na Fianna, St Brigids and beaten senior county finalists Bennekerry/Tinryland are also represented.

It seems a long time since league fixtures were played at the start of the year but Carlow will be looking to pick up where they left off after winning three of their first four games of the season in Division 4.

“We had a good league campaign. They are a great bunch of girls. Their attitude, their honesty, their commitment. A great bunch to work with,” said Carlow manager, Mark Keating.

They face a tough first game against a Wicklow side who will be targetting an immediate return to the Intermediate grade after their relegation last year and they were All-Ireland Junior champions back in 2011.

The game will streamed live and can be watched here from the throw in time of 2pm.