IT has been a brilliant start to the season for us at Newport County so far. Not only have we broken a number of club records in the league, we have also got the furthest that any Newport County team has got in the League Cup when we reached the fifth round only to heartbreakingly lose on penalties to Premier League side Newcastle Utd.

There are probably a couple of reasons why we have started the season so strongly and a lot of people players included deserve credit for it. All the players came back to pre-season training probably as fit as they had ever been, with the lockdown cancelling last season and that allowed the management team to get to work on tactical work with us straight away. The other big reason is the recruitment of new players in the summer and now the squad strength is brilliant and there are some many players pushing each other for the starting XI spots.

We have had a couple of injuries so far this season, but the team’s strength has not been affected whatsoever and sometimes it has made us even stronger than before which is great to have. A couple of inspired positional changes for players too have been key and it now allows us to be strong both in attack and defence while playing some very attractive football along the way.

We have always had a very strong bond as a squad and there is a core group of players who have been here four seasons and we have always made the new players feel very welcome and made sure they were buying into our philosophy on and off the pitch, and what way we wanted the dressing room to be like and stuff like that is very important. All it takes is for a couple of people to be pulling the wrong direction to cause issues and weaken the group.

We went top of League Two after a brilliant 3-0 away victory against one of the pre-season title favourites Bradford City last Saturday, and in truth it could have been more than three for us (editor note* Pádraig is too modest to mention that he scored his first league goal of the season in this game, a brilliant finish from the edge of the box just two minutes after coming on as substitute). We were excellent for the whole game and it was as good an away performance from us since I have joined the club. Bradford didn’t really look like scoring and it was our third clean sheet in a row in the league for us and at the other end we have lots of players chipping in with goals which makes us look very dangerous. 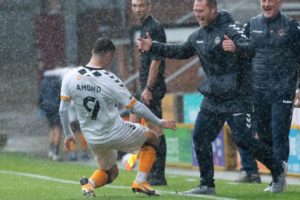 It was a strong week with us also beating Stevenage away from home last Tuesday night 1-0 and we are starting to really make a name for ourselves now. Teams are setting up to try and nullify our strengths rather than playing to their own strengths and that is a massive compliment to us really. We have been playing some free flowing football this season but we aren’t afraid to mix it up either and we know fully well that when the game turns into a bit of a scrap there aren’t many better teams than us to get a result in those conditions.

It is still very early days though and there are no prizes handed out for being top of the league in October so we need to make sure in ten games time we are still in a really good position to be challenging at the top and to continue to make the gap bigger hopefully between the automatic places and play-off spots or to those just outside the play-offs.

Because of the late start to the league this season, the games are coming thick and fast and we have another two games coming up this week again. We are in the middle of a run of six games in just eighteen days and these are the periods of season when teams that are going to be successful come out of smelling of roses and so far so good for us.

Tonight (Tuesday) we are at home to Colchester United who are just outside of the play-offs and then on Saturday we face recently promoted Harrogate Town who are after having a great to the season and they sit in sixth place in the league so it will be a tough week for us. This is why it is so important that we have a strong squad and if changed are made we need to make sure whoever comes into the side are ready to make an impact and also to try and keep the shirt for themselves for the next couple of games too.

The Pádraig Amond column appears in the Carlow Nationalist every Tuesday