No Carlow League soccer until 2021

CARLOW League chairman, Noel Jordan, said that it is likely to be 2021 before we see any competitive soccer matches take place in Carlow following the start of a brand new six week nationwide level 5 lockdown last week to tackle the spread of the Covid-19 virus. 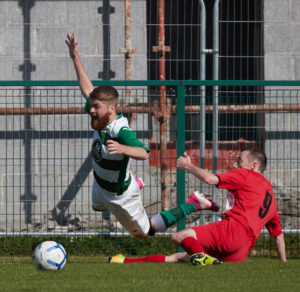 It will be 2021 before teams in the Carlow Soccer League take to the pitch again
Photo: michaelorourkephotography.ie

It’s been a tough year for soccer in Carlow as it came to a halt back in March just as the season was coming to its climax. The League made the decision then to abandon the 2019/20 season and start afresh in September.

Following it’s restart, they managed just three weeks of fixtures before level 3 restrictions were brought in, bringing the season to an immediate halt.

Now, with teams not being allowed to even train until the start of December, at the earliest, Jordan says that unless the country is placed in lockdown again after Christmas, they would be working hard to try start back in the middle of January, with the aim of completing the season in full, even if that means stretching the season into July.

“We’d be trying to organise them in such a way that they’d have a couple of weeks behind them training wise because they’ll need that. Nothing will happen before Christmas, that’s for sure, if we get the go ahead, we’d be looking at the middle of January, end of January. We won’t know for certain until we get back in January, we might not get back in January, it could be February, it could be March, things cou;d change every week that we don’t get any fixtures played. If we get back in January, our aim will be to finish our season completely providing we don’t get another lockdown, even if that means playing into the second week of July. We don’t want to alter the fixtures programme and tell the clubs ‘oh, we’re only going to do one round of league games’, if at all possible, we want to do a second round of fixtures too,” said Jordan.

As for cup fixtures, that will depend on how well the league fixtures go and looking at whether they can fit them into the schedule.

“We’ll have to see how the league fixtures go. I say that because with the likes of the Leinster Junior Cup and the FAI Junior Cup still to be run off, they cause their own problems. A few of the teams, Crettyard, Hanover, New Oak, if the draw goes their way, they could easily go through seven, eight rounds of that competition, meaning we lost seven, eight rounds of Premier fixtures with those clubs. But once it comes into April, we have the possibility to play two games every week, Wednesday, Sunday, Wednesday, Sunday so we’ll pull games back fairly quickly that way. Our intention would be to get the cup competitions finished too, we know how much it hard it was on the clubs not getting their season completed last season so our aim is to complete our season in full. We would then hope to start again in mid-end of September,” said the League chairman.