CARLOW forward, Rachel Sawyer, says the team never allowed themselves to let their heads drop even though they trailed by fourteen points at one stage in the first half. By the interval they had partially clawed back some of the deficit (3-7 to 1-3) but still had it all to do. 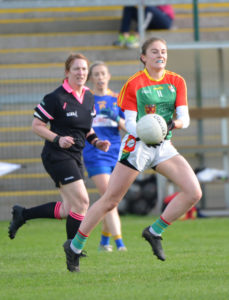 Rachel Sawyer played for the Carlow camogie team last Saturday and then turned out for the county footballers 24 hours later
Photo: Adrian O’Neill

“We didn’t got off to a great start. They took their scores and chances. They got a good run at us but we fought back well in the second half,” she said.

While Eibhe Lawler knocked over a 31st minute point Carlow conceded another goal. Even that didn’t derail their mindset.

“We were all very positive for the whole game. We knew little things were going wrong and little passes were not right. We were playing well and we did play well,” said a defiant Sawyer, who featured for the county footballers less than 24 hours later.

The Naomh Bríd club player says they are also bracing themselves for the changes which have been forced on them by the decision to allow counties play only one team in the All-Ireland championships. They were due to take on Tipperary but the Premier County already have a team at senior level so their second squad will have to step down.

“We are waiting confirmation about who we are playing next. They are reshuffling the championship and with the second teams of the counties not being allowed to play, we don’t know who we have next.”