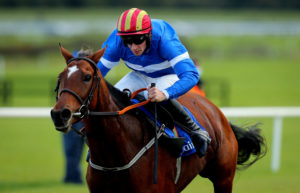 The former, who is 9-2 joint favourite with Paddy, has been a revelation so far over fences, winning two from two including on her debut in a beginners’ chase at the Galway Festival in July, when she was 10 lengths too powerful for Doctor Duffy and then a comfortable follow-up when mastering Rapid Response by nine lengths in a novice chase under David Mullins at Fairyhouse earlier this month.

The Kilkenny conjuror said: “At the moment both Court Maid and Chavi Artist are heading for the Paddy Power Cork Grand National, but heavy ground would rule both out and hopefully it doesn’t get any worse.

“Court Maid has improved for the bigger obstacles there and she ran very well the last day in a good race at Fairyhouse – we decided that there are so many nice prizes in handicaps over fences we would get a mark and see what sort of mark we get and tackle one of those nice handicaps and work from there.

“She jumps very well for a novice – the only little thing is David gave her a nice ride at Fairyhouse. They were at it five fences out and he took a pull and I’m afraid it might be a false reading as the others fell in a hole after the last and David swooped.

“She wouldn’t run if there’s heavy in the going description at all. She’ll improve for the step up to three miles, but three and a half is definitely going into the unknown. She should handle it well as she’s a good staying mare, but we won’t know until we try.

“It’s her first handicap and there aren’t too many entries [22 entered] and she’s in good nick so if she runs I’d give her a good chance.”

Following 13mm of rain in the last 48 hours, the ground is yielding to soft on Cork’s chase course and soft on the hurdles track with forecast showers today and Friday and heavy rain on Saturday.

Chavi Artist, a 12-1 shout with Ireland’s favourite bookie, has been running well without quite getting his head in front, including when runner-up to Discordantly on his last start in an extended 2m 6f handicap chase at Galway this month.

The seven-year-old had previously seen jockey Trevor Ryan unseated in the Munster National at Limerick earlier in October, having again been runner-up before that in the Mayo National at Ballinrobe in September.

Mullins continued: “Chavi Artist bumped into one at Galway where the winner got a run on him early on. It was a funny start, a dubious start and David didn’t realise they were off for 50 or 100 yards and could never make it up.

“The winner got a run on us down the back and we were never going to peg him back – it’s one of those things.

“Heavy ground would rule him out as well and you never know about the step up in trip until you try, but I think both horses will get the trip no problem.

“If he wins one, he definitely deserves one as he was unlucky at Galway where the horse got a run on him. He was unlucky at Ballinrobe where he got bumped into the fourth last and he was flying in the Munster National when another one knocked him off so no-one would begrudge him.

“I’d be very hopeful if the ground stays right that he’d have a good chance.”

Mullins has around 15 jumpers in at his Goresbridge nerve centre and when asked for a horse to follow, he pinpointed Rock Chica.

He said: “The handicapper dropped her too quickly on the Flat and I couldn’t get her into the races that I wanted to so the other option was to go hurdling.

“She had a nice run the first time and then won by 26 lengths at Tipperary. I’m very excited about her future over hurdles, she’s only a three-year-old and I’d have to be thinking about the Fred Winter [now the Boodles Juvenile Handicap Hurdle] at Cheltenham.”