IT was in July when The Nationalist last spoke to the Carlow manager. Restrictions were gradually being lifted and players were back training and doing what they could do to maintain fitness levels.

Colm Bonnar promised he would be allowing intercounty players to get on with the club championship and would not be trying to entice them back into county commitments. 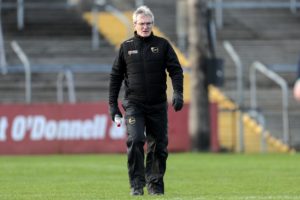 Back then, he reflected on a disappointing league campaign but was adamant the players would embrace the Joe McDonagh Cup when it came around.

Now the competition is upon us but the uncertainty continues.

“Another lock-down. They are keen to keep the GAA going so it looks as if we will have a senior championship,” said Bonnar last week.

He is relishing the return to competitive senior hurling.

“There are some huge games starting off in the Leinster Senior Championship and the Joe McDonagh but our focus is on the Joe McDonagh,” he says while assessing Carlow’s rivals in the competition

“Antrim, having beaten Kerry in their league final, are on an upward curve. They have a home draw against Westmeath in our competition. They have got a hell of a start with that league final win over Kerry and a Joe McDonagh Cup game before coming to play us. It would be very important that we can set the tempo or meet the tempo Antrim will bring with them.”

It is a fair bet Carlow could lose one game and still make the final. The Barrowsiders have a home venue the week after the Antrim game.

“We haven’t even thought about Meath. It is so important to start in a positive manner against one of the favourites. We are just happy to have them at home rather than driving to some place in Belfast. It is a good start but you do have to put up a performance in your home games and get points on the board.”

The nature of the competition sees Carlow travel for their final two tests.

“We have tough games heading to Kerry and Westmeath and if you need points going into those games it will make it really hard. Having said that we are the experienced team and we got huge experience playing in the Leinster championship. I know Division 1B didn’t go well for us but they realise what this Joe McDonagh is about and are coming along nicely.”

Nearly all the panel which played in the 2019 Leinster senior hurling championship plus the 2020 NHL 1B campaign are back for the Joe McDonagh. One absentee is Sean Whelan while Chris Nolan picked up a serious leg injury playing for Mount Leinster Rangers in the senior club football championship.”

Bonnar is not fazed by the lack of results in both those competitions.

“It was probably our poorest phase in the number of players who were available for us but now we pick from a panel of 26 players. We have had a number of challenge games in preparation so we should have a very strong panel to pick from now,” he says while confirming James Doyle and Nolan could miss the earlier games in the competition.

Most of this current Carlow group of players have picked up Christy Ring and Joe McDonagh Cup medals in finals at GAA headquarters.

Bonnar says this must stand to them.

“We have strength in depth, players with a lot of experience who have played in Croke Park. It has been a difficult transition having been in Leinster and NHL 1B but the lads are looking forward to this.”

When it comes to the bigger picture, the Carlow manager has always had his fingers on the pulse With the country being closed down now, hurlers are getting a chance to get out and do something.

“We are one of the lucky ones that we can get out and play our sport,” confirms the Carlow manager.

“We hope we can do the right things in that sense. Obey the rules and follow the guidelines. There are matches to be played too and we have to focus in on that.”

Beko and Leinster GAA looking for Carlow Club Champions – One Carlow club to win €1,000 worth of gear