THE preparation for any game in this Covid era could hardly be described as perfect but as Niall Carew gets ready to take charge of the Carlow football team in a Championship game for the first time he feels his team are as ready as they could be. 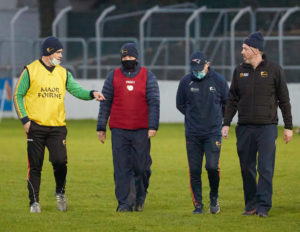 While most of the work done for any is on the training pitch, they are judged by what they do on matchday and from that point of view, Carlow made the perfect start under Carew with a hard fought two point win over Sligo in their only competitive game since matches resumed.

“It’s a work in progress for us,” said the Kildare man.

“The biggest thing for us is to make sure we improve in every training session, that’s the idea of it. We are doing a good bit of cramming but we have no choice, we are just trying to get as much done as we can. At the same time then you are hoping things come right in each game. We know we won’t get everything right, defensively we have a good bit to improve on and even, I would have been disappointed we didn’t get a few more scores against Sligo, so were the players. We’ve a good few things still to get right.

“Winning is everything. You would have been happy with the performance (against Sligo) but at the same time it has to be backed up with a win and thankfully we got that. There’s no doubt we have a lot of work to do but the players are really buying into it and training hard. Anything we have asked of them they are doing it. We’ve got great support from every club in Carlow and that’s a big thing. 60 odd lads put their hands up and said they wanted to play for Carlow and we’re disappointed that we had to let some of them go but that’s no reflection on them and after these competitions we’ll definitely look at those players again,” said Carew.

Any team can win or lose a game on any given day but the manner in which his team came back from a couple of setbacks to secure the late win against Sligo pleased Carew immensely.

“You are going to get tight games this time of year and a lot of lads stood up for the last day, as a team. You couldn’t fault any one of them and they all put in a big shift. Yes, Paul Broderick might have had 0-10 beside his name but you have to look at the supply he was getting from out the field, and that’s testament to everyone out the field as well,” said Carew, who will be without Sean Murphy for the rest of the season and will wait to see this week if Shane Redmond can overcome a hamstring injury to take his place in the team.

Sunday’s game in Tullamore, throw in at 1.30pm, is the first Championship meeting between the counties since 2007. Back then a defeat for Carlow was followed by an infamous Tommy Murphy Cup game against Waterford when they conceded 8-10. There will be no backdoors or second chances if Carlow lose on Sunday and even though Offaly have lost both their games in Division 3 since the resumption, to Tipperary and Derry, and finished just one place outside the relegation zone Carew knows his team are in for a tough test.

“Offaly are a very seasoned team. They have a manager there in his third team so he knows his players inside out. They have players like the McNamees, Bernard Allen, Anton Sullivan, Cian Farrell, you have Peter Cunningham coming back into the fray as well last week. They are quality, quality forwards. We are going to be up against it but at the same time we know if we perform well we won’t be too far away,” he said, and even though the match is in Offaly’s home ground he feels the pitch may suit Carlow.

“We were pulled out first in the draw but maybe Carlow owed Offaly a home game. It would have been nice to have the game at home but Tullamore is a fine pitch, a big pitch, and it might suit the way we play,” said Carew.

These days even travelling to games needs more organisation than usual but Carew said Carlow are happy to follow whatever protocols they have to.

“We’ll travel up separately in cars. Whatever guidelines we are told to follow we’ll do exactly as we are told. The county board and our liaison officer have been doing Trojan work looking after that and everything is in place,” said Carew.

All that is needed now is a win, to ensure that Carlow have to arrange more travel details for Leinster quarter-final in Portlaoise on 8 November against his native Kildare.