No win for either Carlow team despite big scores

IF you were told before the weekend that the Carlow footballers and hurlers would score 2-45 between them you would surely think that both recorded comfortable wins, or at least one recorded a very comfortable win.

And yet, despite racking up big scores, a draw for Colm Bonnar’s hurlers on Saturday against Antrim was the best result either team could manage. 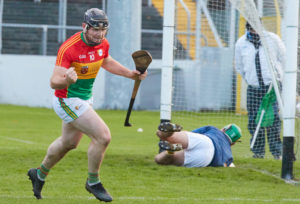 That neither the hurlers nor the footballers won their games owed much to the concession of goals. The hurlers conceded five goals in their draw against their Ulster opponents, and pretty much of all them were avoidable from a Carlow point of view. While they could point to the initial foul leading to the penalty for Antrim’s third possibly being outside the square and also a strange decision to award a 65 rather than a wide ball in the lead up to the fourth goal, both goals that Antrim scored in the first half were simply down to poor defending.

It was a real pity that those soft goals came back to haunt Carlow because overall it was a fine display by Bonnar’s men and it should stand them in good stead for the remainder of the competition.

Chris Nolan showed what he can bring to the team by scoring five points from play after coming into the as a second half substitute, while there was also solid scoring contributions from Jack and Marty Kavanagh. Although heartbreaking to have a win snatched away in almost the last play of the game, a draw is not a disaster for Carlow and their Championship prospects remain in their own hands.

Next up for Carlow is a home game against Meath on Saturday at 2pm. Meath are no pushovers but it’s a game that Carlow simply must win before what is shaping up to be a season defining game in Tralee against Kerry.

It was a similar story for Niall Carew’s footballers on Sunday. We’ll have to delve deep into the record books in the coming days to find the last time that Carlow raised 20 white flags in a Championship game, and yet it still wasn’t enough to win the tie.

Carlow was always chasing the game following Niall McNamee’s early goal and further strikes either side of the half time break from Jordan Hayes and Bernard Allen put the Faithful County in a strong position.

Encouragingly for Carlow, they refused to throw in the towel, even when the colour of the flag raised after a Paul Broderick penalty was white rather than green. A run of six points in a row brought Carlow to within two points of their opponents and although that was as good as it got, Niall Carew will have seen plenty he can work with. 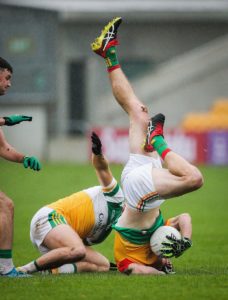 He has spoken of changing the style of Carlow’s football and that takes time. With 2-17 scored against Sligo in the League and then 0-20 last Sunday there are already signs of what he would like to do after just four weeks working with the full panel. Of course, there are two sets of posts on a football field and Carlow can’t solely be occupied with attack while conceding big scores at the other. But nobody will know that better than Carew and as he says himself, this is a work in progress. It will be fascinating to watch that progress during 2021.