UNBEATEN superstars Envoi Allen and Honeysuckle head the entries for the three Grade 1 races on the second day of the Winter Festival at Fairyhouse on Sunday 29 November. 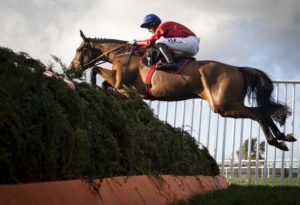 Envoi Allen features among the bumper entries for the Fairyhouse Winter Festival at the end of the month
Photo: Patrick McCann/Racing Post

So impressive at Down Royal, Envoi Allen is one of 18 horses entered for the Grade 1 Baroneracing.com Drinmore Novice Chase. Boasting a perfect record in bumpers and over hurdles, Gordon Elliott’s charge got “ten out of ten” from jockey Jack Kennedy when making a winning debut over fences at the northern venue last weekend.

Unsurprisingly, Elliott dominates the entries with the Cheltenham Festival scorer Milan Native, and Andy Dufresne and Pencilfulloflead, winners over fences at Wexford and Galway respectively, among his early team of eight.

Heading the opposition would be the Paul Nolan-trained Latest Exhibition, a winner on his first try over fences at Punchestown last month and Joseph O’Brien’s dual-chase winner, Home By The Lee.

Honeysuckle will bid to repeat last year’s runaway success for owner Kenny Alexander, trainer Henry de Bromhead and jockey Rachael Blackmore in the Grade 1 Baroneracing.com Hatton’s Grace Hurdle. She’s a five-time Fairyhouse winner and set herself up for victories in the PCI Irish Champion Hurdle at Leopardstown and the Mares’ Hurdle at the Cheltenham Festival with a nine-length win in this race in 2019.

Willie Mullins has entered three, one-time Champion Hurdle favourite Saldier, the Cheltenham Festival winner Saint Roi and Bacardys, runner-up to Honeysuckle in this race a year ago. Gordon Elliott has another Cheltenham winner, Sire Du Berlais, Cracking Smart and Fury Road entered while Beacon Edge and Sixshooter are there for Noel Meade.  A three-time Fairyhouse winner and runner-up in the Stayers’ Hurdle at this year’s Cheltenham Festival, Ronald Pump has been given an entry by Matthew Smith and Jessica Harrington has her triple Grade 1 winner Supasundae in the race.

Envoi Allen got the better of his own stable companion Abacadabras to win last year’s Grade 1 Baroneracing.com Royal Bond Novice Hurdle and their trainer Gordon Elliott is well represented among the 26 entries for the latest renewal.

The Down Royal winner Ballyadam, Call Me Lyreen and Eskylane look to head his team of seven while of Willie Mullins’ nine, the Cheltenham Festival winner Concertista, Finest Evermore and N’golo lead the way. Cask Mate is one of three entries for Noel Meade and it’s no surprise to see the Ted Walsh-trained Dewcup in the early line-up.

BARONERACING’s Barney O’Hare said: “We are proud to be the associated with the Fairyhouse Winter Festival. The meeting has developed itself into a headline day in the Irish racing calendar. The emphasis is on quality through the card with three Grade 1s, two ultra-competitive handicaps, the best early season juvenile hurdlers and a bumper that has produced top horses in the past.

“Envoi Allen is as exciting a novice chaser as we’ve seen for some time, while Honeysuckle is becoming a people’s horse and we look forward to her lining up in the BARONERACING.com Hatton’s Grace Hurdle.”

Peter Roe, General Manager of Fairyhouse Racecourse, said: “We are delighted with the quality and strength in depth of the entries for what is now firmly established as one of the most important days in the jumps calendar.

“This card last year produced five Cheltenham Festival winners in March and the highest-rated novice hurdle in the year was the BARONERACING.com Racing Royal Bond Novice Hurdle. Honeysuckle will be out to retain her Hatton’s Grace crown, while Envoi Allen will be bidding to become the first horse to win three different races in three consecutive years on the card having previously won the bumper and the Royal Bond.

“This card has developed over the years thanks to the support of Barney O’Hare through his BARONERACING group and we are particularly appreciative of his unrelenting support this year.”

Elliott affair leaves an uneasy feeling on many levels