DESPERATE to prove ourselves after our previous result, there was a confident, positive attitude in the dressing room before our game against Galway, this weekend in Ferrycarrig Park. 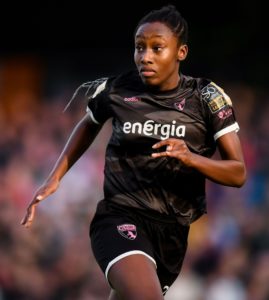 Leading up to the game we were placed third in the table with Galway in fifth place, with just one point between us. I was in the starting line-up, so I was really eager to produce a good performance for the team.

The game began with us being very dominant and creating numerous chances, however, from all the possession that we had, in the first-half, we just lacked quality with our final ball. It was almost like a loop, we’d build our way up to the edge of their box, but then either fail to execute the pass correctly or the shot would be dragged wide.

For example, my teammate – Ciara Rossiter, unfortunately, rattled the crossbar with an amazing effort, but that didn’t stop up us from building momentum. We were solid at the back, with credit due to Nicola Sinnott and Orlaith Conlon and this solid defending by them allowed us to push up as a team and apply strong pressure to the Galway back-line.

I was leading our forward line and I had to chase down a lot of loose balls and their back- line was growing shakier as the half went on, resulting in us creating more and more opportunities, but sadly none of them were converted and the interval came with a 0-0 scoreline.

We started the second-half the way we had finished the first, with us seeing plenty of the ball and I was replaced by Sinead Taylor on the hour mark.

With the change of personnel, there was an immediate impact when Kylie Murphy took a shot that was palmed away, by the Galway keeper and Sinead Taylor met the resultant rebound and smashed the ball into the back of the net, to secure a vital 1-0 lead.

However, Galway were not going to give up easily and they responded, immediately, as Aoife Thompson scored to bring the sides level again but we never stopped pushing and pressuring our opponents.

Ellen Molloy made a fantastic run through the middle and scored with an unbelievable strike, all the Galway ‘keeper could do was stop and stare as the ball rocketed home and we regained the lead.

Our Manager – Tom Elmes, made two more astute changes, with Aoibheann Clancy coming in first, followed quickly by Vanessa Ogbonna. With five minutes to go and she was involved with our last goal when she cut inside and made a great run with the ball which she then slipped to Sinead Taylor, who then squared it across the box to Ellen Molloy, who scored her second goal of the night, for a fine brace and with a very well rounded team performance, we finished the game with a comfortable 3-1 victory.

Reflecting on my own performance, I found myself dropping back, from being the point of the attack, quite frequently, as I was having to hold up the ball to bring my teammates into play. This is something that has been lacking in my overall game over the past couple of seasons.

Looking back at the game now, I realised that I held the ball up better in this match than I ever have in my career so far and it’s something that I’m quite proud of. It is a trait that I’m very keen to bring into my game on a regular basis as it will make me a more well-rounded player.

In Saturday’s game we got a glimpse of the Wexford Youths team that we had missed for a while and it seems that we might just be getting our confidence back, which will help overall team morale.

Although deep down we know we can play some good quality football, but, It wasn’t just that, we played for each other, we communicated, we made selfless runs for the good of the team and held ourselves, individually and collectively accountable for our mistakes.

That’s what sets us apart from other teams when we play at our best and I just hope that we can do the same against Peamount Utd – the league leaders, this coming Sunday in the FAI Cup semi-final in Ferrycarrig Park at 2pm.