COLM Bonnar, the Carlow manager, was put through the mill last Saturday when his team began their Joe McDonagh Cup campaign. At times it looked as if Antrim would pull away. Then in the second half, Carlow looked set for victory. A draw in the end left him with mixed emotions. 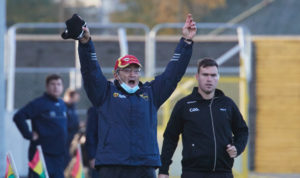 “There was a breeze there and we scored fifteen points in the first half. We were doing well in terms of scoring opportunities and chances. Come the second half we felt with the breeze it might give us more space inside and that is how it worked out.

“We scored 2-10 in the second half. At several stages we went four, five points up and Antrim kept coming back to get a goal to keep them in it. We would go again and create another lead and they would come back. It was very frustrating in those final five to six minutes to see those goals going in. It was desperation stuff for Antrim. Normally, that doesn’t happen. Teams that drop balls in, it doesn’t work out for them,” he said.

Carlow could have won the game. They could also have lost it so Bonnar was not entirely unhappy.

“At least we have a point on the board. It would have been an absolute killer, the way the boys played today, if they had got nothing.”

Like the players, the management team were not sure how the squad would react if Antrim set the early pace. As it turned out, notwithstanding giving away 2-2 in the first half, Carlow looked fit and ready.

“We were coming in cold into this game. Antrim had two quality games under their belt. They had a lot of momentum coming. We didn’t know where we were but today I am so proud of those lads. Man for man they wore that jersey with pride.”

“When we look back at it, we know ourselves, we were in possession of the ball before they capitalised and got goal opportunities. It was us coming in cold and that is what happens championship style. Those touches aren’t coming as quickly as you would like.

“That game will stand to us. When we look at the video we will see we created many of our own problems which helped them get back into it. You cannot fault the players, they are so committed. Their hurling, their attitude, their commitment,” praised the Carlow manager.

Carlow’s second game in the Joe McDonagh Cup against Meath takes places in Netwatch Cullen Park on Saturday at 2pm. You can purchase a stream to watch the game live here.

Beko and Leinster GAA looking for Carlow Club Champions – One Carlow club to win €1,000 worth of gear