IT is a winner take all on Sunday when Carlow travel to take on Fermanagh in the Lann Léire club in Louth for the All-Ireland junior football championship third round Group 3 game. Whoever wins advances to the semi-final with the losing side exiting this year’s championship.

So far Wicklow have won both their group games, seeing off Carlow by 3-15 to 2-5 but Fermanagh were a lot closer before going down by 0-9 to 1-2 to the Garden County.

Having said that, the Carlow manager, Mark Keating, says Wicklow were flattered to win by as much as they did against his side.

“The girls were disappointed. The scoreline didn’t reflect that game,” he emphasises.

Carlow have no injury worries. They were back training on the Tuesday after their Wicklow set-back.

“I have been impressed with the girls all year. I believe in them and the players I have I couldn’t have asked any more from them. I do believe we can do it on Sunday.”

This season more than any other Keating says the players have brought their preparations to a new level.

“They wanted an organised structure from me. They wanted strength and conditioning, psychology. We have brought a lot to the table and those girls have responded. They have put the time in. I have put my heart and soul into it. They appreciate that and I appreciate their work,” the Carlow manager said.

The game will be streamed live here. 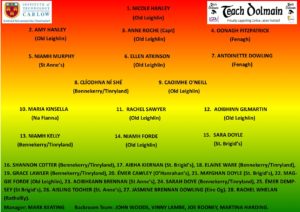