BEFORE lockdown in March, 15-year-old Adam Dee was thriving, hitting top scores in the JDC each week. When everything came to a halt, Dee, a member of the County Carlow Youth Darts academy, was sitting at number two in the world standings and there was no indication as to what would happen next. However, on Wednesday, he got confirmation that he had received a JDC Tour Card for the JDC Advanced Tour in 2021, where he will go head to head with the top 32 youth players in the world in 12 events. He also qualifies directly for the JDC World Finals in Gibraltar. The JDC (Junior Darts Corporation) is a subsidiary of the PDC and is a new initiative designed to help kids from 8-18 get started in the game in a fun way and prepare them for the PDC. 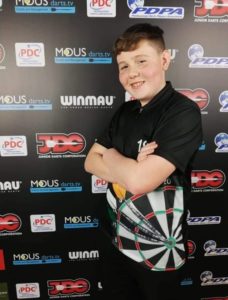 His mother and coordinator of the JDC in Carlow, Gillian, explained that it’s been a long time coming. “There are different tours every month, two in the one day usually but due to Covid, they only did them in January, February and March. Overall on their order of merit, he was ranked 16th and at the start of the year, what they had said they were going to do was something similar to the Premier League where the top 32 play each other in their own league for a full year. With Covid, we didn’t know whether that had all been postponed or anything until we got an email through this morning saying he has got his tour card for 2021 which is great news. He also qualified for the world finals in Gibraltar in November.”

“He’s currently sitting at number one in the JDC Worldwide Order of Merit for his grade, He was supposed to be competing in the Super 16’s for that in December where the top 16 go head to head but Covid has put a stop to that. It is [a huge achievement], it’s great, it’s a massive achievement. At the moment, not everybody can grade though, some of the guys in Dublin for instance aren’t grading because they don’t have the facility to do it,” Gillian added. “However, he was sitting at number two before Covid hit so it’s not like he was sitting at number one because nobody else could do it and finished number one in Ireland so it’s not like it’s just a Covid thing. Usually what would have happened for the World Finals is that he would have qualified for the team event in 2020 as the top 8 in Ireland qualify for that but it didn’t go ahead. It’s great knowing that he’ll qualify for not just the team event for 2021 but as a singles competitor too. That’s very exciting and we’re all so proud of him. It’s usually all English guys who qualify for it and so it’ll be nice to see some Irish guys over there but at the moment, he’s the only Irish player to qualify. We just have to look for sponsorship now, get some names on his jersey.”

Dee looks quite the promising young star, having not just realised those achievements but another one too and it’s safe to say he looks like a star in the making. “During Covid, there was a virtual tournament too and he qualified for the finals of that in Gibraltar in April too so it’s all very exciting. It was a massive surprise but there was great excitement and we’re hoping that it can all go ahead.”