STEVE Lennon fell just short against James Wade last week at the European Championships, just losing out, 6-5. Having broken the world no.11’s throw in the first leg, Lennon would have been hoping to kick on and win the game but he missed crucial darts to go 2-0 up and hold his throw, allowing Wade to bounce back immediately. He also missed the chance to break Wade’s throw later on in the match. Lennon admitted that the early break of throw was the turning point. 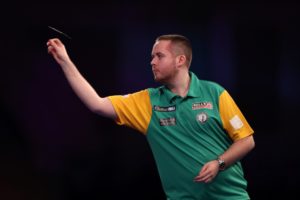 “It was a close game but I feel the big turning point in the game was my missed chance to go 2-0 up. Had that happened it could have been a totally different game. Sometimes it can be from lapse of concentration but they were just badly thrown darts unfortunately. The more you play on the big stages the more experience you gain so it won’t be as big of an occasion. I knew before playing James Wade that he is one of the best finishers around so if you do make mistakes you will get punished for it. I thought I scored well but maybe lapses of concentration caused my slack darts at crucial times.”

He is happy with his progress though. “I always feel I’m making improvements in some ways even if they are only minor ones. At the start of the year my main aim was to qualify for European Championships as last year I didn’t come close to it so that was a target achieved. But obviously once you’re in the tournament there’s so much ranking money at stake you can sometimes try too hard to get as far as you can in the tournament. It was nice to be back on stage again but hopefully I can fix my errors and push forward now for the remainder of the year.”

He’s looking forward to the World Cup starting on Friday evening where he will team up with Limerick’s Willie O’Connor to represent Team Ireland in Austria. Lennon and O’Connor will have good memories from the competition having been runners up last year to the Scottish pair of Peter Wright and Gary Anderson. “Yeah I really can’t wait, it’s one of my favourite tournaments of the year just with all the lockdowns and restrictions happening now around Europe hopefully it will still be going ahead.”