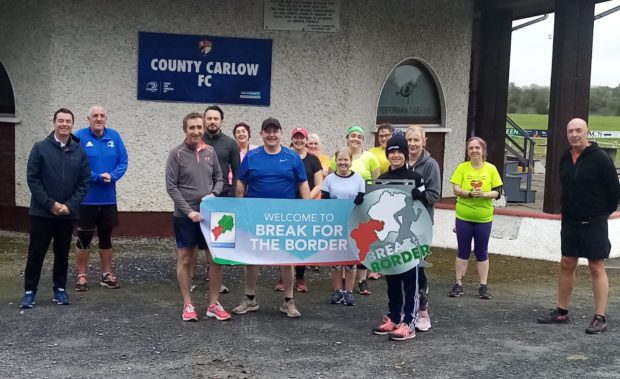 The runners of Dolmen AC on a recent club run

Carlow’s newest athletics club was born out of growth of recreational running.

Dolmen Athletic Club became officially affiliated to Athletics Ireland in March and has over 30 members.

Being affiliated with Athletics Ireland will allow the club to run Fit4Life programmes, insurance and coaching courses.

The club is currently based out of Carlow Rugby Club and are very grateful to their hosts for the use of their facilities.

Prior to the latest restrictions, training runs typically take in the scenic Oak Park area. Training takes place in pods of 15 under the Level 3 restrictions. The club currently just caters to adults.

There is a good mix in the club with those training for marathons or preparing for the first 5k.

David described the latter group as the “lifeblood” of the club.

When Covid restrictions were lifted in June, the club did its first couch to 5k programme with around 15 taking part.

“They were just walking at the start. At the end of the 10 weeks, we ran a virtual 5k which they all did without stopping. It was a great achievement for them.”

It’s been tumultuous year for running events in Carlow.

Covid-19 has led to many local races being cancelled but many races are now running virtual versions. It’s a great way to keep motivation up and Dolmen AC recently took part in the Break for the Border virtual race recently.

“I’m getting contacted week after week with enquiries but it’s strange times with restrictions. It’s hard to plan for anything,” said David.

“There has been very little going on. It’s cross country time of year as well and there has been big cancellations there. It’s really the juveniles that have suffered the most. It’s difficult time but people are just trying to keep up their fitness.”

Prior to the latest restrictions, the group trained Tuesdays, Thursdays and Saturdays. Since Level 5 restrictions were imposed, the club are still organising training sessions on an individual basis through Whatsapp. People can get more information on the group’s Facebook page.