KILKENNY great Eoin Larkin will prowling the sidelines of Carlow in 2021 after this year’s beaten Senior Hurling finalists Ballinkillen landed a major coup by appointing him as their manager. 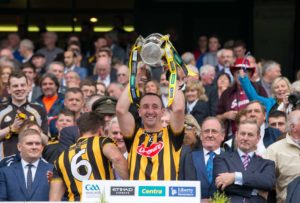 Larkin has one of the all-time great hurling CVs, winning eight All-Ireland titles and ten Leinsters during his 11 years with the Cats, which ended when he retired from inter-county hurling in 2016. He also scored nine points and was man of the match when his club, James Stephens, won the 2005 All-Ireland final and he was awarded All-Stars in 2008 and 2009, and was named hurler of the year in 2008 as well.

“We are delighted to have someone of Eoin’s experience,” said Ballinkillen Chairman, Brendan Leen.

You can read more reaction from the Ballinkillen club, and an interview with Eoin Larkin by Kieran Murphy in Tuesday’s paper.