IT was a hard defeat to take and Carlow manager David O’Mahony couldn’t hide his disappointment, but also his pride at his team’s display even though their season was ended at the hands of Kerry in IT Carlow last Saturday afternoon.

“They are great girls, really,” he said.

“They prepared very well for this match and there was a good buzz in the group leading up to it. We had a good performance against Antrim and we were unlucky there as well. I really thought we’d win today and it’s very disappointing to lose, especially the way we did. We were ahead for a lot of the second half. They got 1-1 just after the water break and was probably the turning point of the game and we were under pressure then after that. In fairness to the girls, when we did go behind we still came back and got that last score to send the game to extra time. They was massive character shown, huge leadership all over the field, they just dug in. We were hoping that we’d kick on in extra time and it looked like we might but it was just the killer blow of their goal,” added O’Mahony.

There were stages were character was needed and the Carlow girls showed they had it.

“We were on the back foot when they levelled the game and then went ahead. We really had to produce something and the girls did. We had a couple of wides, a couple of chances, and we were turning them over. I did feel we’d get the equalising score because of the way they were working around the field,” said Portlaoise man, O’Mahony.

The manager ended the game in the stands after his protests over Catherine Kavanagh’s disallowed goal and even well after the final whistle he was still shaking his head at that decision.

“I thought he was very bad for a lot of the game. I don’t know, for that one, the two Kerry girls ran into each other, he’s out on the 45, can he definitely call that as a head injury that quick? If it was in any other game I know anybody would have been as upset as I was. It really was a killer, that would have won us the game. To have it taken away like that was very, very disappointing,” he said. 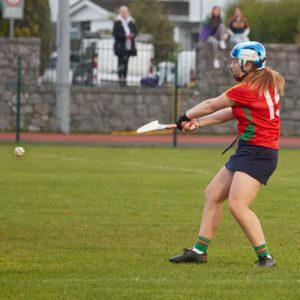 Catherine Kavanagh scores into the empty net at the same time as the referee blows his whistle to stop play
Photo: michaelorourkephotography.ie

Looking back over a season like no other, O’Mahony felt his team couldn’t have prepared any better given the unique circumstances of this season.

“It’s November now, it was around this time last year that we started back and began to get things together. We did well in the league and performed well in a couple of practise games and were starting to get a bit of momentum, it was shut down then and the girls went back to their girls. We are probably back now about two months, we had about five practise games and were getting better with each one so I knew we’d have a good chance in this competition, unfortunately we just fell just a little short here today,” he said.

With so pressure on this game and the first round tie against Antrim, no thought has yet gone into how Carlow may prepare for a new season.

“I haven’t been thinking about that at all, all our focus was on Antrim and then the game today,” said O’Mahony.