ON Saturday, when Richard Coady, was brought into the action in the second half he became Carlow’s “most capped” championship hurler with fifty appearances. He went one ahead of his older brother, Eddie, on 49. With 164, Eddie Coady, himself, holds the record for appearances in all competitions. The information was provided by Leo McGough the noted GAA statistician. At the end of the game Richie was taken completely by surprise when reminded about his achievement. 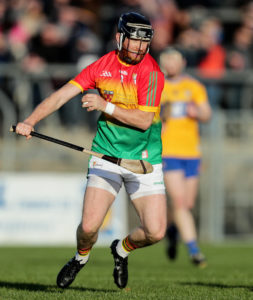 “In fairness, Leo is very seldom wrong. If that is the stat he has, well, he is never wrong.”

“Obviously, it is a proud moment. Fifty championship games. What great players are after going here before us. Eddie (Coady), Shane Kavanagh, Robbie Foley. It is something I will look back on later on. Hopefully there is a few more there. As long as the body stays going, I will stay going.”

He watched from the stands until called into action on 63 minutes.

“It was a strange game. It was a game we wanted to take two points from. The most important thing was to get them. Regards our performance we will have to look at it over the next couple of weeks,” he said.

Carlow struggled up front as the Meath full-back line kept potential Carlow dangermen, Chris Nolan and Marty Kavanagh shackled. Admittedly the duo were fouled on many occasions and Marty converted resultant frees. It was still worrying to see Meath turn defence into attack picking up much loose ball on the Carlow half-forward line.

“We will have to improve on a lot of things. Meath dominated us in a lot of sectors today. Take nothing from Meath they are an excellent side and are after improving hugely over the last three years. They are so comfortable on the ball, well able to play on the ball and play a football style. I thought their puck-outs were excellent and they punished us on their puck-outs. Definitely we have a lot of improvements to make before we go down to Kerry,” suggested Coady.

Outside the camp there might have been a perception Meath were going to be a soft touch compared to Antrim, Kerry and Westmeath. Coady scoffs at this kind of attitude.

“It should never be done. I never like this thing that it is only Carlow, it is only Meath, it is whoever. There are excellent clubs, excellent hurlers in all these counties and players are as proud to put on a county jersey as a Kilkenny or a Tipperary man. There is never a bad hurler who represents his county.”

Carlow hoping for a miracle in Mullingar