Depleted Irish squad opens the door for others to shine

THE list of players ruled for Ireland for tonight’s game against Bulgaria in the Aviva Stadium is almost as long as the squad for Stephen Kenny to pick from but rather than feeling down about his luck, the Irish manager sees the game as an opportunity for players to stake their claims for a place for when the World Cup Qualifiers begin next March. 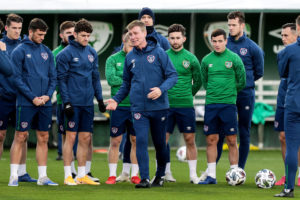 Stephen Kenny at training with the Ireland squad ahead of tonight’s UEFA Nations League tie against Bulgaria
Photo: INPHO/Laszlo Geczo

Callum O’Dowda is the player to pick up an injury rendering him unavailable for the game. Definitely missing are suspended duo Jeff Hendrick and Jayson Molumby, while Adam Idah has returned to his club, Norwich, after picking up a knock in Sunday’s defeat to Wales. They are further blows to Kenny after the news earlier in the week that James McClean and Matt Doherty had both tested positive for Covid-19.

Despite this string of inconveniences and the bad luck that has dogged this tenure so far, Kenny remains upbeat.

“This game is very important, and then we focus on the World Cup Qualifiers in March. By then, we’ll have a back four that’s back of players available like Seamus Coleman, Matt Doherty, John Egan and Enda Stevens. We’ll have players like James McCarthy and Hary Arter available and attacking players like Aaron Connolly and Callum Robinson. That’s just off the top of my head.”

“These players that are getting their opportunity [against Bulgaria], will supplement the players, and create competition for places… We’re building a squad of players,” said Kenny.

The manager has added Shamrock Rovers pair Graham Burke and Aaron McEneff to the squad, as well as promoting Troy Parrott and Jack Taylor from the Under 21s.

Going into eighth match in charge of the team, Kenny is still searching for his first win and has seen his team go the last six games without scoring.

It’s been a tough spell for all involved but Aston Villa midfielder Conor Hourihane agreed with his manager that it could be the time for players to really step forward and make their mark.

“It hasn’t been an easy camp, but everyone that’s here will want to make an impression. It’s their chance to shine now, and that’s what happens in football. Chances come by in strange times. Lads will want to take their chance and prove to the manager what they’re about.”

“It’s such a shame [without fans]. The supporters, the intensity, the energy around stadiums isn’t there at the minute. That’s just life,” said Hourihane.

The UEFA Nations League tie kicks off at 7.45pm and is live on Sky Sports.