Nicklaus’ backing of Trump is hard to fathom

ONE wonders what was Jack Nicklaus thinking about. On Thursday morning last on a grey and murky morning he and Gary Player teed off in what has become a ceremonial opening to the Masters. 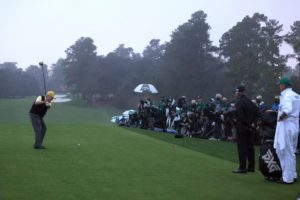 Jack Nicklaus plays the opening tee shot on the first tee during the first round of the Masters at Augusta National Golf Club last Thursday. as Gary Player watches on
Photo: Jamie Squire/Getty Images

It should have been a moment of celebration for both players, for the Masters and for the sport of golf. Yet this year and maybe forever more, it was hard to feel any affection for Big Jack as he joked and chatted with his great South African rival.

Less than two weeks previously he had revealed on Twitter he had voted for Donald Trump and urged others to do so. The content of his communication was astonishing and the immediate response was that the great man (Nicklaus) had lost it. But no. He went on to reveal why he had voted for the outgoing President.

“This is not a personality contest; it’s about patriotism, policies and the people they impact. His (Trump) love for America and its citizens, and putting his country first, has come through loud and clear. How he has said it has not been important to me. What has been important are his actions. Now you have the opportunity to take action,” was just part of what Nicklaus tweeted.

Was the twenty times Major winner talking about the same Donald Trump, who on the campaign trailed four years ago mocked Serge Kovaleski a New York Times reporter who suffers from a degenerative joint condition? True to form Trump denied he had done so. A bit like his back tracking when he suggested that imbibing disinfectant was a possible cure for the Covid virus. Criticised for saying this he said he was only being “sarcastic.”

When you are explain yourself, you are losing it is said.

All that kind of stuff recedes into significance when compared to the way he has handled and continues to handle the Covid pandemic.

It is amazing for Nicklaus to remark on Trump’s love for the American people. Nothing could be further from the truth. The only people who Trump really loves are those who he is certain are going to vote for him. While Joe Biden was holding rallies in car parks and in halls with massively reduced attendances and people observing social distances, the President went from state to state where he addressed his followers in crowded hall and packed venues. It was reckless. Wearing a mask was not for the President. By not doing so he was encouraging others to follow his example. Social distancing was not on the President’s agenda. He needed to be able to hit on as many potential voters as he possibly could. It was damn the possible health consequences for everyone else bar him.

The President’s use of Twitter has wavered from one extreme to the other. At times it is childish. Other times his comments are shallow and patronising while quite often he is libellous and provocative. Even Twitter, has distanced itself from many of the Trump tweets stating “This claim about election fraud is disputed.”

Used as often as they have been now, Fake News and Corrupt are words more associated with President Trump than anyone else or anything else in the world. But Jack Nicklaus says he understands as part of the golfer’s Tweet indicates.

“You might not like the way our President says or tweets things-and trust me, I have told him that!-but I have learned to look past that and focus on what he’s tried to accomplish.”

Well bully for Jack. He has talked to his President about it. Yippee. With one giant leap the golfing hero breaks free?

If it wasn’t so serious the comments from Nicklaus would be laughable. Only last Friday, Cindy McCain, the widow of the 2008 Republican candidate, John McCain, spoke about the hatred and vitriol which has grown in a divided America. As a republican and a worried onlooker she has urged people to put aside their differences and work together. She spoke about how the United States is viewed abroad.

“I don’t believe our country is respected the way it was,” she said on CNN News. She said it as many states in America are reporting record number of new Covid cases every day.

Meanwhile, Trump went to ground until last weekend and only communicated through social media. He continues to cast doubt on the validity of the election. By doing so he is casting doubts on the integrity of the ordinary American citizen. Even if there was an issue, he was President for the last four years. Why didn’t he and his administration implement a program where the integrity of an American election could not be called into question?

Nicklaus must know the President’s words matter in America. The 20 times major winner got himself involved in a toxic Presidential race which he should have stayed out of. Trump has brought decency to its knees in the United States. It is worrying, that despite completely ignoring the safety advise in relation to the Covid virus over 70m people voted for him. In the first Presidential debate his comments urging his supporters, about “standing by” suggest it wouldn’t take much to push America into an authoritarian situation and a form of dictatorship.

“I know we are only a few days from 3 November, but I am certain many of you have not made up your minds. But if we want to continue to have the opportunity to pursue the American Dream and not evolve into a socialist America and have the government run your life, then I strongly recommend you consider Donald J Trump for another four years.”

Now everyone is entitled to their own opinion and should be allowed to voice it. It is called democracy. However, Nicklaus is an American sporting icon. In the light of Trump’s behaviour and confrontational approach the Golden Bear would have been well advised not to have articulated his political leaning as he did here. He tried to give respectability to an individual who, by his actions, doesn’t deserve it.

It is not stretching it to suggest Nicklaus brought his whole sport into disrepute. Having said that golf doesn’t need Jack to help bring a the game of golf into disrepute. It is well able to do it all by itself. In the light of its history in allowing coloured people and women to play golf and enter their club houses golf is still only coming to terms with total inclusivity.

Portmarnock Golf Club is still in a consultation process to allow women full rights to go wherever they want in the clubhouse. Women can play the course but don’t have full access to all the facilities men have. Also prime Sunday tee times in most golf courses in Ireland are dedicated to men’s competitions.

Back in America, the number of coloured golfers on either the men’s or ladies professional circuit in America suggests racism is thriving at source long before any of them get to Tour School.

Golf is a great game played by millions of people all over the world. You would like to think Jack Nicklaus’s tweet was just that. A tweet. But was it?