CARLOW travel to Tralee on Saturday for a do-or-die clash against Kerry in the Joe McDonagh cup on Saturday. Antrim beat Kerry last Saturday and now top the group table with five points so they are all but in the decider, set for Croke Park on 13 December. Kerry have played three of their four games and a win on Saturday against Carlow would see them finish on six points with Carlow currently on three points. Westmeath and Meath have lost both their opening games and are out of contention. 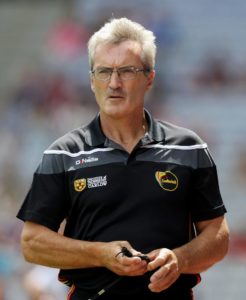 Carlow manager Colm Bonnar on the Croke Park sideline during the 2018 Joe McDonagh Cup final, if they are to get to this year’s decider they need to beat Kerry on Saturday
Photo: ©INPHO/Tommy Dickson

Colm Bonnar has done the sums and knows what is ahead of him on Saturday.

“It is winner take-all. Antrim beat Kerry and this is Kerry’s last game now. To get to six points they have to win. Antrim have a game in hand and have to go to Meath. No disrespect to Meath but you would expect Antrim to pick up the two points and go to seven points. They have a huge scoring difference as well,” said the Carlow manager.

If Carlow win here it would mean their final game against Westmeath would be a dead rubber.

Two years ago Carlow went to Austin Stack Park and came away with a 1-18 to 0-11 league victory. The Barrowsiders went on to win the NHL 2A title that year. Historically the two counties travel similar paths and Kerry played the 2016 and 2017 season in Division 1B before coming down to 2A. That is the nature of hurling for both counties.

“They love their hurling. There is a sections in Kerry there and they are as passionate about their hurling as the boys here in Carlow. Both of them are going to play it out to the very last,” predicted Bonnar.

“Tralee is never an easy place to go to. We know what we have to do. Kerry know what they have to do so it will make it an intense occasion.”

In Shane Conway Kerry have a match winner up front. As his performance in two UCC Fitzgibbon Cup finals would suggest, he would get on to most teams in the country. Against Antrim at the weekend he scored 1-7. Chris Nolan knows all about him too and when UCC and IT Carlow met in the Fitzgibbon decider this year Conway scored 0-9.

“He scored 1-3 from play the last day against Antrim and we cannot give him handy scores from frees. We need to make them work as hard as we can but it is such a fine art now with the tackles going in and it will be 50-50 ball. We have to hope it won’t be decided on frees.”

Carlow have the usual few niggly injuries but they should clear up. The visitors will not have James Doyle who is still recovering from a leg injury.

The two sides met in a challenge game earlier in the year. Bonnar knows the Kerry manager well with both of them being involved in Waterford IT Fitzgibbon Cup successes. Both are proud Tipperary hurling men.

“Fintan (O’Connor) is an out and out hurling man. He is trying to get the best out of these Kerry boys. They have a huge incentive because they had been put in a very uncertain situation that if they win the Joe McDonagh they had to play the bottom team in Munster. That is not the situation this year. If they win the Joe McDonagh they will be put straight up. That is a huge incentive for them. There is so much riding on this game. It will be hard to pick up the two points whoever wins,” says Bonnar.

With an early throw-in time on Saturday, the Carlow players are travelling down on Friday night and will have their own single rooms in a hotel.

Despite the time of the year Bonnar says the team have embraced the situation and love what they are doing.

“This is the challenge intercounty players want. They want to play for something and no better game than this than the chance to be playing in Croke Park on All-Ireland final day. It doesn’t get bigger than this,” Bonnar says.